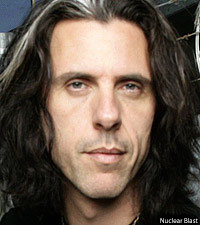 It's a good thing metal bands don't ask to see musicians' iPods before auditions. If they did, Testament might never have invited guitar whiz Alex Skolnick to be a part of their legacy. Obviously, iPods weren't around when Skolnick tried out in the mid '80s, but you get the point. The dude's iPod is hardly a soundtrack to armageddon. The machine is abuzz with jazz, blues, classical, world music, pop and classic rock, but there aren't a lot of headbanging hits on there. In fact, the most metallic thing in his submission is Y&T's 'Forever.'

"Interestingly, [after I wrote down the first 20 songs that came up for you], I skipped forward a few, and the next ten were more diverse," Skolnick tells Noisecreep. "They included hip-hop artists Notorious B.I.G. and Beastie Boys, country performers Johnny Cash and Chet Atkins, and Stevie Wonder."

In Skolnick's case, having such diverse listening habits is a good thing. The dude's already well-schooled in metal and jazz, so delving into other genres helps him keep an open mind when he's writing leads for Testament. And being able to shut down the metal mode almost completely is probably helpful when he's working with the Alex Skolnick Trio or the Trans-Siberian Orchestra.

"I have over 7,000 songs in my iPod, so it's hard to say what a 'typical' list would be, as every list comes out different," he continues. "I have a bit more jazz than anything else, so this list makes sense. At home, my iPod is my main source of music, as well as on the go."

Here's what popped up when we persuaded Skolnick to put his iPod to the test:

Millie Jackson -- 'It Hurts so Good'

Horace Silver -- 'Song for My Father'

The Cars -- 'Tonight She Comes'