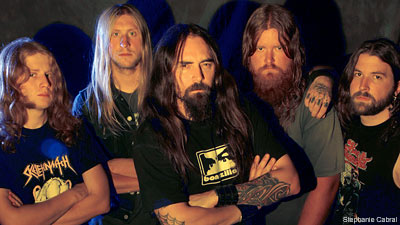 As some of the leaders of the new school of thrash metal, the boys in Athens, Ohio quintet Skeletonwitch play swift, staccato riffs and rapidfire beats colored with gargling death metal vocals and some epic, atmospheric rhythms reminiscent of the best Viking power metal. So, it's pretty comforting to see that drummer Derrick 'Mullet Chad' Nau's iPod is mostly filled with the kinds of songs that inspired his band's music. Hell, his random shuffle list even includes one of his band's own songs, "Soul Thrashing Black Sorcery" from Skeletonwitch's 2007 album 'Beyond the Permafrost.'

"The list turned out to be not as embarrassing as I anticipated," he tells Noisecreep. "I wish my own band's material hadn't come up, but oh well, I guess. Listen to Skeletonwitch."

The rest of Nau's iPod shuffle features a tasteful mix of classic metal, New Wave of British Heavy Metal, black metal, thrash, experi-metal and grindcore. There's also a smattering of classic and progressive rock acts like David Bowie and King Crimson, and classical composers, including John Williams, Howard Shore and Stravinsky. For Nau, it's all part of a well-balanced, high protein music diet.

"Other than Bone Thugs 'n Harmony, I'd say this is a pretty accurate representation of the kind of stuff I generally listen to," he says. "Some stuff is played a little, or a lot more than other tracks, but random is random. Like most folks, I have more music on my iPod than I am able to listen to, although I do try to limit it to the albums I actually listen to with some frequency."

Bathory -- 'The Golden Walls of Heaven'

Agalloch -- 'You Were But a Ghost In My Arms'

Howard Shore -- 'The Treason of Isengard'

Darkthrone -- 'En As I Dype Skogen'