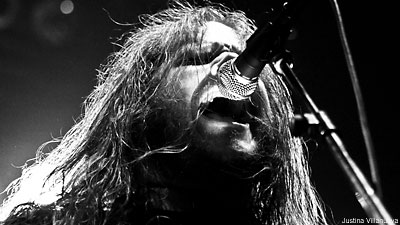 Mike Thompson is Withered's only original member since Chris Freeman departed last summer. Almost a year after Freeman's departure, Withered is still working on music. The band's integrity and work ethic has not changed, either. For their next release, Waited member and Withered friend Dylan Kilgore has taken Freeman's place.

"Chris isn't really contributing at all other than listening to demos for fun. I think we wanted to move on with everyone that's in place and really illustrate what Withered is now. We're not much for looking back to the past. We accept our path and embrace it," Thompson told Noisecreep.

Withered plan on entering the recording studio on from May 7 to May 21. Thompson says the new material will be "more tortured" than their last release, 'Folie Circulaire,' and have some of the founding grind elements that were in their first record, 'Memento Mori.'

"It's still very Withered, just with some new complementary twists. We've introduced some slight black 'n' roll elements, as well as a number of other things. Like always, we just wait to see what comes out of us. If we like it, we use it. This album will take more of a philosophical approach, though. There will be some very analytical elements to it that we've never fully illustrated in the past," Thompson added.

After recording, the band will play a couple tour dates with Eyehategod in June.

"It'll be an honor to share the stage with them. Not to mention the partying should be excellent," Thompson said.