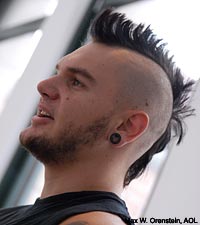 Winds of Plague vocalist Johnny Plague -- who works at Knotts Berry Farm's Knotts Scary Farm Halloween exhibit in Southern California, and claims to worship the holiday -- is a tried and true Halloween man. He loves the holiday and not just because of his day -- well, night -- gig, either. He has a goblin tattoo and admits that working at Knotts got him even more into Halloween.

His favorite Halloween candy? "Laffy Taffy is my favorite," he told Noisecreep. He also recalled last Halloween in Kansas City, when Winds of Plague toured with Dimmu Borgir and Dimmu didn't wear their trademark corpse paint -- and Winds of Plague did!

Working as a dude who scares the s--- out of people in an amusement park has its perks and its pains, and occupational hazards for Johnny Plague. "It hurts to walk upstairs because the job has torn my knees up, since I am always sliding with the chainsaw and chasing people," he admitted.