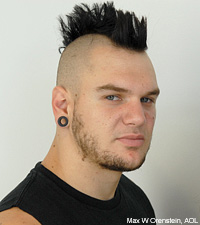 While California's Winds of Plague recently wrapped up their aptly-named California Love Tour, there will be no rest for the wicked, as they'll hit the road in January on the Never Say Die Tour with Despised Icon and Stray From the Path.

"This tour is rough, since I am a California boy to the core and I do not do well in the whole cold weather thing," vocalist Johnny Plague told Noisecreep at the tail end of the California-themed jaunt. "I am dying. All the guys in California walk around in snow clothes while dudes from Finland wearing shorts and a T-shirt." The singer signed heavily when asked if he dreads pounding the pavement on the tour circuit in bitter winter months like January, when the Never Say Die Tour kicks off.

For the California Love Tour, the band relied on Twitter to determine the set list. "For the current tour, we played 10 songs total: five from the new record and five old songs," the singer said. "We posted a tweet on Twitter asking kids what songs they wanted to hear, and we paid attention to their answers and based the California Love song choices off that post. For the next tour, we are still going to do five old and five new, except we may swap out some of the new songs and play two new songs we've never played from the new record. Since we've never played them live, we're going to practice, practice, practice."

One of the never-before-played songs will be the title track from the recently released 'The Great Stone War.' The band didn't rely on social media to pick the songs for the upcoming Never Say Die Tour; rather, they relied on direct, social interaction with their fans. "We've now been talking to kids after shows, and we ask them what they want to hear," Johnny said. "They keep saying the title track. They are the reason we get to live this life, so we have to listen to them!"

In between the tours, the singer was adamant that he will remain far away from the snow and the cold because "I am sure I will have plenty of it in the months to come." He also revealed that the band will be hitting Europe in the spring -- and that some major tour plans are in the works for summer, which he could not reveal, saying, "I can't say anything other than it will be the best summer we've had."