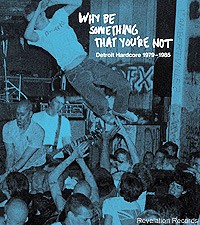 Tony Rettman has authored 'Why Be Something That You're Not: Detroit Hardcore 1979-1985,' which recounts when the Motor City was a musical hub, and we're not talking about the Motown sound. When the city was suffering through a cultural, social and physical meltdown and the Romantics were the most visible musical export, suburban skaters, a grade school teacher and census clerk took to the streets to begin one of the first hardcore punk scenes in the country. Rettman's book takes a hard look at that scene and he answered some of our most pivotal questions.

What made the early Detroit hardcore scene special?

It was one of the first scenes for this type of music in the U.S. very early on. The L.A scene might have cultivated the look and overall approach to the music, but the people who made up the early '80s Detroit hardcore scene had a huge part in forging the aesthetic of it along with Ian MacKaye and the Dischord label, as well as Greg Ginn and Chuck Dukowski at SST Records. I also find the music to be more timeless than other punk stuff from the same time frame. The bands didn't bog themselves down with singing about Reagan or foreign policies. It was pissed off kids going off on authority of all kinds; something anyone with half-a-brain can relate to whether they're 15 or 50 in the years 1981 or 2010.

Why did you write the book?

I didn't come into writing the book with any agenda of righting any wrongs I saw in punk rock history or anything like that. Basically, the group of bands that made up the early roster of the Touch & Go label -- Necros, Negative Approach -- have fascinated me since I was 12 years old. My older brother got involved in the hardcore scene very early on and he brought home all those early releases as well as issues of the Touch & Go magazine and it really twisted my brain. In some real weird way, those records and the mag really informed the way I think to this day. So if anything, writing the book was some sort of 'Thank You' card to those dudes from the Midwest. If it wasn't for them, I could be some brain-dead jerk with tons of money and a house, but no sense of humor and no soul.

What is your perspective on the geographical scenes in this era? Are these pockets being wiped out?

I'd like to think they aren't. It's too easy to blame the general malaise some feel on today's music on technology and the Internet; plus saying stuff like that makes you sound so old! From where I sit, I still hear a lot of sounds coming from all points of the world that revolve around a few people in a certain area that play a certain way. Some of it I hear on the Internet, some of it hear from records I get in the mail. Nonetheless, there's still weirdo kids out there where all this stuff is fresh and new to them and that's where the spark lies. The people who started the Detroit hardcore scene were lucky enough to be at a certain place in time, but that doesn't give them exclusive rights to the music. I would like to think somebody somewhere will read about the people involved in this scene and want to take what they did up a notch in their own way.