Well, Bretgate isn't over yet. That much-promised statement from Bret Michaels, concerning his recent appearance at last Sunday's Tony Awards, during which a descending stage prop essentially kicked Bret's butt, has finally been released, and it's a winner. A long winner, but a winner. We've also got some show announcements for you, news on a world record attempt, and info on how you can be part of this year's Download Festival, all from the comfort of your living room. White Noise - can you hear it?

+ When will it end? Poison frontman Bret Michaels has nearly sucked the publicity teat dry, turning an embarrassing moment at last weekend's Tony Awards into tons of press (yes, we know we're part of the problem) for, well, we're not sure. Press is press, and when you're in a band like Poison and need to find a girlfriend with VH1's help, you'll take what you can get. Michaels has finally broken his silence about the incident, which left him with a broken nose and a fatter lip, saying he's "trying to remain very positive and somewhat humorous about the whole situation."

In a statement posted to Bret's Web site, he apologized for not making a statement sooner, but said he's been "feeling pretty beat up over the last few days." He says he had "a great time at the Tonys, right up until I got blindsided," and while amusing to the rest of the world, "I can assure you it has been painful to experience. In all honesty, I had absolutely no idea what struck my head. Upon impact, I thought a piece of the lighting rig had fallen out of the ceiling and as I fell back it seemed like my head struck the stage and I blacked out for a second. When I opened my eyes, I noticed a large set prop coming down straight for me. I immediately pushed myself out of the way, and amidst the chaos, laid on the floor and asked, 'What the hell just happened?'" 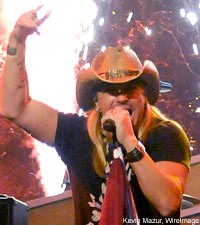 He thought his teeth had been knocked out, he says, and doesn't believe the incident was in any way "malicious." It was an accident, and "I feel this will all work itself out." That's code for out-of-court settlement. "I must state I found it a little strange that the only statement released by the Tony organization was that I missed my mark and that I was completely fine. First, I thought, 'What mark?' as there was no official mark, just a retracting drum riser and an overhead prop being rapidly lowered which was out of my view. Second, I think it was slightly irresponsible for them to report that I was fine without full knowledge of my condition when a doctor hadn't even looked at me yet." Michaels says he isn't interested in an apology, but wishes "that on a human level, the Tony organization's representative would have expressed some concern for injury in their statement or at the very least claim they would be looking into the matter."

+ Metallica have booked a concert that will benefit the Marin History Museum in San Rafael, California. The show will go down in September, and will feature other acts, as well; rumor has it Jane's Addiction may also perform. We'll be bringing you all the details as they're announced in the coming weeks.

+ Want to see Shadows Fall, up close and personal? The band will be performing June 19 at J&R Music World in New York City; the show starts at 6 PM, and will be followed by a meet-and-greet. The 'Shad will be released its next studio LP sometime this September.

+ Italian death metallers Faust (a band featuring current and former members of Testament, Death, Dimmu Borgir, Doro, and Profanatum) have a new album slated for release in September. 'From Glory To Infinity' will boast nine tracks, including "Sentimental Worship," "Carnal Beatitude," and "A Religion-Free World's Dream." 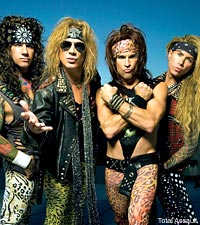 + By now, you've probably heard of Steel Panther (at right), the 80s hair metal parody that's somehow become this overblown sensation. Well, this weekend, in jolly old England, the band will be performing as part of the Download Festival, and are hoping the crowd will help them break a Guinness world record. What for? The most number of people playing air guitar simultaneously. Good luck with that.

+ The fact that Faith No More's reunion tour won't be reaching U.S. soil is a downer, to be sure. But if you can't make it over to Europe to see the band perform, at least you can watch them rock the masses on your laptop. The band has agreed to let the organizers of this year's Download Festival stream their set live from this weekend's gig. Watch it starting tonight at 9PM EST.

+ Dragonforce will be back on our continent this fall for a tour that also features Sonata Arctica and Taking Dawn. The trek kicks off September 18 in Los Angeles, Calif. and dates are booked through October 11 in Philadelphia, Pa.