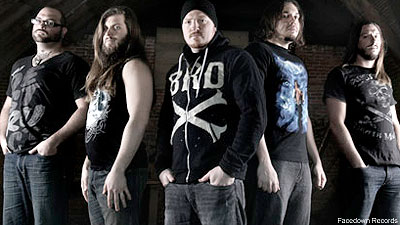 Leroy Hamp, lead screamer for the Erie, Pa. metalcore act War of Ages, is a bestial war animal on stage. But in person, he is as mild-mannered and considerate as could be. His personality, he said, has always been this way, but it unfortunately has lead him into serious trouble. "I was a very helpful kid," he told Noisecreep. "I liked helping everyone, and I had that personality. The paperboy needed my help and he kidnapped me. [He was a] 16-year-old boy."

It isn't difficult to lure an innocent preschooler into helping you out if they are willing, and the kidnapper took advantage of that fact. "He actually just said, 'Yeah you can help me deliver papers,'" Hamp recollected. "He took me further and further away from home, and I started noticing. And I was like, 'Hey, can I please go back home now?' And I was too far away for me to go myself. I didn't know where I was."

Implying that the perpetrator had lecherous plans for his captive, Hamp continued, "He took me far away from home and would not take me home, unless I 'helped him out' in a few areas. So I was a scared kid. I was in pre-school."

Luckily for Hamp and metalcore fans everywhere, he was returned to his guardians safe and sound. Regardless of that, Hamp still had to overcome the trauma that comes with being taken from home. "It's definitely taken some time to get over," he said. "I'm definitely over it. I went through to proper stages and channels to fight through something like that, but it was definitely a hard thing for sure. I could've been a lot worse."

While the incident certainly caused emotional problems in Hamp's life, the after-effects haven't trickled down into any War of Ages lyrical content. "I don't really touch base with too much abuse," Hamp said of his writing. "It's more so overall problems ... I deal more with 'overall picture' things than individual issues. It's not about these little things in life that happen; it's about who you are as a person and how you're going to get through those things. That's what War of Ages deals with."

War of Ages' will be on a U.S. tour with As I Lay Dying and Demon Hunter starting late April, to support their forthcoming album, 'Eternal.'