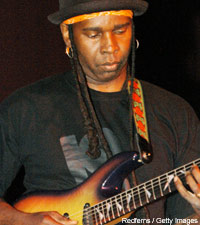 Living Colour carved out their own piece in the genre-bending spectrum. Formed in 1983 in New York City, they were best penned on paper as funk metal, but reached such a much wider fan base. You may remember them best for the single "Cult of Personality," which sounded like Bad Brains on a pop music bender (and won them a Grammy in 1989).

After spending the 90s with Epic Records and their only release this decade with Sanctuary, Vernon Reid and the rest of Living Colour have settled with Megaforce for their release of 'The Chair in the Doorwary,' their fifth studio album.

Including a video of the band performing their new single, 'Behind the Sun,' on WYNC's Soundcheck this past weekend, MetalSucks had a meaty interview with Reid about the making of their new album and the lives of the band's members outside of the project. "You know, everybody [in the band] is a parent now, we all have different things that we do," Reid told MetalSucks. "I have a project with DJ Logic called the Yohimbe Brothers, Will [Calhoun, drummer] has a couple of jazz projects, Doug [Wimbish, bassist] is in, like, 10 other bands, Corey [Glover, vocals] has a solo career, and he started going on stage, doing 'Jesus Christ Superstar.'" He also believes that 'The Chair in the Doorway' should garner the greatest attention to Corey's talent, in that it showcases his vocals better than any record they've done.

Reid also describes the album title, which is very much like the cliché about "the elephant in the room." There's more mystery involved in its abstract presence, though. "The notion that everything can be explained and articulated ... I don't think that everything necessarily should be explained and articulated." The best part comes later, when Reid discusses the attitude of "being metal," and even throws in an interesting anecdote involving Henry Rollins standing outside of CBGB's.

Finally, Reid offers words of wisdom about longevity. "I kind of don't believe in inertia theory of band life -- like, the band exists just because it exists," he said. "I think it's about the work." Living Colour have a ton of U.S. tour dates starting this week, including a performance on 'Late Night With Jimmy Fallon' on Sept. 21, before making their way over to Europe with a heavy tour itinerary.