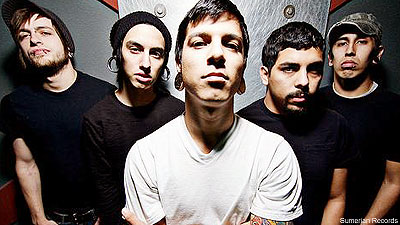 Killer Lyrics: We will decimate the human race creating the words of your salvation / Welcome to a new age / A rebirth

Upon a Burning Body make their debut in the metal world with their Sumerian Records release, ambitiously titled 'The World Is Ours.' 'The Devil's Advocate' was the first song released from this album, and at first glance its lyrics appear equally ambitious, what with the transformation of lives through salvation and 'decimating the human race'.

In reality, though, the song is about something more mundane. In the spirit of Bon Jovi's 'Dead or Alive' and a select number of rock songs throughout the decades, 'The Devil's Advocate' is really about life in the music industry. More specifically, it is about the band's struggle to create a career -- a subject with which many young bands can identify.

"The song is my way of venting out the frustration I had while trying to get a record deal and just get our name further out there," the band told Noisecreep. "It is from the heart and one of my favorite songs on the record!"

Upon a Burning Body have CD release shows planned in early April, followed by a full American tour with Carnifex and Annotations of an Autopsy.