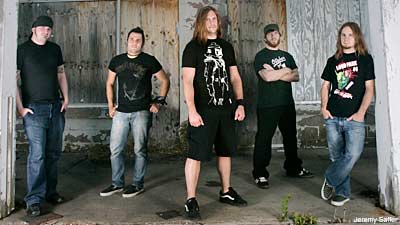 "This special edition has a ton of edited DVD footage and webisode footage ranging from the making of and recording of 'The March,' documentary film from our midsummer Northeast run where we climbed back in the van for a small club tour, some late-night party stuff filmed during our tour with Testament this past June, four live performances from Wacken Open Air 2008 and videos for 'My Will Be Done,' 'Grave of Opportunity' and 'Crow Killer,'" Unearth lead singer Trevor Phipps told Noisecreep about the Nov. 10 reissue of this band's last album, 'The March,' which was originally released in October 2008. "The packaging will be pretty tight and the full track listing with the bonus tracks will be on there, too."

The special edition hits shelves while the band traipses the country with Hatebreed, Cannibal Corpse, Born of Osiris and Hate Eternal this November and December. Phipps continued, "So for all those not in the know of 'The March,' they can go out and see what it is all about."

Special editions and re-releases, especially those of which are issued less than two years after the original, are a point of contention and bone of controversy between fans and record labels. Fans feel 'cheated' for having to re-purchase material at a later date, making them wonder if they should have waited to buy all the bells and whistles at once.

"A 'special edition' is usually a release with bonus material that usually consists of a DVD with backstage footage, live material and some documentary style video. There is also sometimes an extra 'previously unreleased' track or two on there and maybe some pimped out CD packaging to go along with it," Phipps said, summarizing. "The intention of a special edition is for potential new fans we make on tour and any real die-hard fans who really want an extra view of who we are and what our band is about.

"It is mostly designed to get more albums into stores and keep the interest in the band as high as possible. If the diehard fans want it or new fans want it, it is totally worth it. We have a big fall/winter tour coming up that will coincide with the special edition release and we want the new people we play in front of to have the opportunity to head out the next day and pick up our disc after they see our high energy gig."