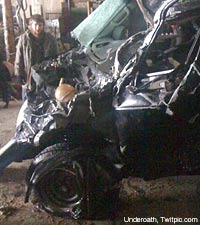 Christian metalcore act Underoath were forced to cancel a gig Dec. 8 in Omaha, Neb. after the band's van, carrying all of its gear, was totaled en route to the Gateway to the West. Fortunately, the band was traveling in a bus and not in the van at the time, but their driver did sustain minor injuries.

Underoath are on tour with Emery and August Burns Red through Dec. 17 in New Orleans. The accident comes just days after Weezer were forced to cancel the remainder of their tour after frontman Rivers Cuomo was injured in a bus accident."Our van carrying all our gear got into a very bad accident," the band says in a statement. "The driver has some injuries, but is stable. However there is no possible way we can make the show tonight. Please pray for our friend Zack that was driving. He's in pain but he survived which is honestly a miracle if you would have seen the van."

The band has posted not one but two pictures online, showing the wreckage. The tour is expected to carry on despite the crash. "If there were any way we could make the [Omaha] show work, we would, but it's not possible," the band says. "Our sincerest apologies to all who are braving the weather to get to the show. Please drive safely back home. There have been way too many accidents lately. We love you all and will keep you updated."

The tour is expected to resume in Lawrence, Kan. tonight.

Underoath, who are working on material for a new album, released their last studio set in 2008. 'Lost in the Sound of Separation' has since been nominated for a Grammy in the Best Boxed or Special Limited Edition Package category.