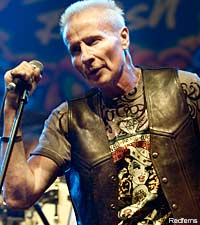 "What the f--- is moshing?" vocalist Phil Mogg asked during a recent UFO concert in Dayton, Ohio. The band, 40 years young, played McGuffys, a little hole-in-the-wall rock bar typical of the Midwest.

The question of 'no moshing' perplexed Phil thanks to a stern sign on the wall, warning against such unsavory dance moves.

If it had been a younger crowd of metallers, there may have been objections but because the fans were older and looking straight ahead at a rock legend, Phil's odd commentary was simply embraced with a head nod, swig of beer and shouts of "Just Play 'Doctor, Doctor!'"

And play they did.

During the band's 90-plus minute set, UFO ripped through scores of their old tunes including 'Mother Mary,' 'Cherry,' 'Rock Bottom,' 'Too Hot to Handle,' 'Lights Out' and, of course, 'Doctor Doctor.'

The guys in UFO used their space limitations beautifully, treating the tiny stage as an arena. As such, Phil Mogg and guitarist Vinnie Moore seemed to feed off each other, looking for inspiration. There's no doubting Moore's ability as a lead guitarist: UFO is a solo band after all. Even at the end of the set when fatigue would set in on the most agile players, Moore kept right on shredding and riffing, proving his abilities as an underrated axe man. In many ways, Moore's finger work was the entire showpiece of the Dayton performance -- but this isn't to imply the rest of the band couldn't keep up.

For a man of over 60, Mogg ably jumped around stage, twisting his hips and making weird smiles at the mostly male crowd. This should be a high point for Mogg: looking back at so many years of success and realizing there's still so much music yet to come. Seemingly well in shape, Mogg didn't leave the stage often for a break. In fact, he rarely left at all, save the massive guitar breakdown during 'Rock Bottom.'

Youngster Rob DeLuca is playing bass for UFO during this current American run. No stranger to the stage, he fits right in with the band, providing an appropriately heavy bottom to some of the band's most-loved tunes. Most importantly, DeLuca was always in time with drummer Andy Parker. Naturally, the same should be said of guitarist/keyboardist Paul Raymond. Happily taking a stand on his side of the stage, Raymond plodded along, dutifully playing his parts, acknowledging the fans and not stealing any of Mogg's limelight.

Despite UFO's place in rock music history, there were still many patrons surprised at the massive midweek turnout of support. At $18 a head, the show proved that people will still spend on live music during a recession -- if the product is high-quality and songs are dished up in massive quantity.

Filed Under: ufo
Categories: News
Comments
Leave A Comment
Back To Top