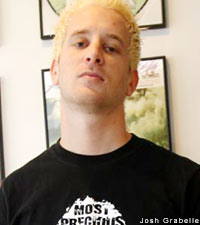 Trustkill Records, the little label that could from central New Jersey, is gearing up in 2010 for new releases from vegan warriors First Blood, Brooklyn, N.Y. hardcore stalwarts Most Precious Blood, as well as newbies like the Great American Beast, Kid Liberty and Victory in Numbers.

Label head honcho Josh Grabelle recently caught up with Noisecreep about how he decides what bands will call his label home, saying, "I get 20-30 emails a day from managers, lawyers, agents and bands -- and on top of that, I must get 20-30 packages a week to check out, and you have to weed through it. But through a few good years of experience, we are able to figure out quickly if a band is serious or legit or not. I wish the music business was as easy as, 'This band is awesome. Let's sign them and put out a record.' But it's not."

Trustkill was at the zenith of the new wave of American hardcore and metalcore in the '00s, with Bleeding Through, Throwdown and Bullet for My Valentine having called the label home at one point or another. Grabelle, even with all of his label's successes, is still learning and growing with his company, which is ultimately an effort to stay viable in the music business' ever-changing climate.

"I don't want to say I've made mistakes, since I back every band I signed," he said. "But there were bands I signed because they were great, wrote great songs, but didn't work as hard as we worked. I spend 20 hours a day working on this label, and some bands are just kids who get together with friends and write great music -- but don't realize to fulfill their dream, they need to bust their ass. Signing a deal is not winning a lottery where you don't have to work anymore. It's the opposite. When you sign with Trustkill, you have to work your ass off since we are, too!"

Grabelle and Trustkill are also evolving as the music business continues to change. They are shifting with the shifts and recognizing a markedly different landscape. "We used to sign a band and be able to put a record out right away, get it in stores and work to promote it and publicize it," Grabelle recalled about a period in the music business that isn't too far in the rear view.

"Years ago, that was the catalyst to breaking the band: creating word of mouth and the buzz and hype would lead to record sales. That's not how things work anymore. You can't sign a band and put a record in stores right away because there are no stores to put records in, and kids aren't buying records anymore. They download them. Now we have to cultivate a fan base and generate a buzz before we think of putting a record out." Ah, how things have changed. But Trustkill's experience and track record, coupled with their ability to adjust to the changes the business faces, ensure that new music will find its audiences and ears.