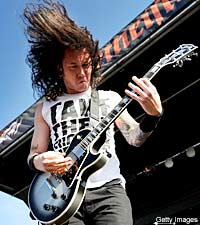 Walking through Chicago's American Apparel about three years ago, Trivium lead singer Matt Heafy heard something that piqued his curiosity. It was Depeche Mode's song 'Sweetest Perfection' from their 1990 album 'Violator.'

"I had never heard the song before," Heafy told Noisecreep. "I went to the clerk and asked, 'What is this?' The clerk looked at me and said, 'Depeche Mode.' I went and bought it immediately. 'Violator,' I listen to that all the time.

"They are one of my favorite bands ever now. Within the past six months, I started backtracking, getting some of their older stuff. I got 'Music for the Masses,' 'Songs of Faith and Devotion' and 'Black Celebration' all within the past couple months. They're one of the bands that inspire me incredibly. Trivium's not going to sound like Depeche Mode by any means. But definitely their songwritership and the way their song structures flow, and how it's right to the point -- they're amazing songs. I've been listening to them and the Beatles and a couple other bands just for their songwriting."

Heafy calls Depeche Mode's latest album, 'Sounds of the Universe,' one of its best -- next to 'Violator,' of course.

"That band just blows my mind," he continued. "It got me into electronic recording. I've been making a lot of stuff that sounds, like, Depeche Mode-y or Nine Inch Nails-y. It won't be for Trivium at all. Learning Apple Logic, I've been able to record a lot of the Trivium demos. Thanks to Depeche Mode, I'd like to think I got into electronic recording. I am able to record electronic demos and send them to the rest of the band."

Heafy, who has never seen Depeche Mode perform live, is hoping to catch their show while he's in Paris on vacation in January.

"I want to see them so bad," Heafy said. "They were playing in Tampa, [Fla.] which was the closest show. But we were getting ready for the tour, so I couldn't go. I'm going to be in Paris in January for vacation, and they're playing there, so I'm going to try to get tickets to that. I've never seen them live. I'm discovering them for the first time, which is really exciting."