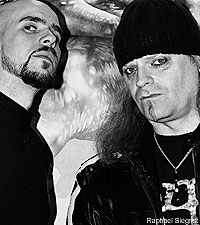 It was summer of 2008, when Thomas Gabriel Fischer -- founder of Hellhammer and Celtic Frost -- announced his new project called Triptykon. Around that time New York based artist Vincent Castiglia was exhibiting his work at the H.R. Giger Museum Gallery in Switzerland. And it was right then, according to Castiglia, that Fischer proposed a collaboration between renowned artist H.R. Giger and Castiglia for Triptykon's first album entitled 'Eparistera Daimones.'

Two years later, the art and album are complete. Giger's 'Vlad Tepes' will be on the cover of the debut release. It is the first time in 17 years that the artist has licensed one of his paintings to be used on an album cover. Castiglia's eery, iron oxide portraits of the four Triptykon members are inside the CD booklet.

When Noisecreep learned that the Castiglia paintings were made with his own blood (the only medium he works with), we decided to shoot the artist an e-mail and learn more about his work.

True or False: Is the portrait on the album cover really made with your blood?

It is, along with the spirit that dwells in it.

We here at Noisecreep are very familiar with how albums are made. But it's not everyday that we hear about a piece of art that was created with this kind of technique. Can you tell us what goes into the planning for this kind of work?

Triptykon's 'Eparistera Daimones' was foremost for me the most incredible honor to work on. Given the gravity of the project, I researched each band member, their individual attributes, as well as contemplating what the group means as a whole. The painting I've created for the album is infused with mystical symbolism, ranging from appointed seals, all the way through to its compositional geometry. The image itself, a seal unto itself.

What kind of safety and preparation goes into working with one's own blood?

It's very controlled and clean in fact. My workspace is sanitized daily, and all activity is contained to a small space in front of the painting, which remains virtually pristine. Because my technique is unprecedented, in terms of the specific ways in which I work and accomplish the level of detail and finish that I do, as well as it's absolute archival quality, it is also mostly private. I don't share the particulars, as a service to the general public.

I connect with my process on a entirely ethereal and cathartic level. It began as somewhat of a physiological inevitability for me, similar to a hemorrhage. In this sense, my paintings are more like resplendent hemorrhages than paintings. I find that it's the most sanctifying act for me in this life ... to submit my essence in the pursuit of beauty and truth, to untangle, just a little further, the absurdity of this human experience.

Can you tell us a bit about the process that went into putting the Triptykon piece together?

There was quite a bit of correspondence between Tom Gabriel Fischer and I over the course of a few months. The initial exchanges were the expression's of Tom's vision and feelings, along with certain visual reference for inspiration. He'd mostly expressed only the very essential details he had in mind. Tom, as always, was so humble, and very sensitive to my vision, which made the process an even greater pleasure. My aim in each group of questions, was to elicit the most pertinent information and otherwise unseen attributes of the group, and to crystallize their essences into a sigil, a visible vortex inspired with the group-spirit, while drawing also from a very ancient symbology. The concept of it all being that this comprehensive approach catalyzes the literal emanation of the qualities of each member, interpenetrating each other, with all elements ultimately unifying as a hieroglyphic portrait, the emblem of Triptykon.

Were there any obstacles you faced in this particular piece that you haven't faced before?

None. It was created with total pleasure and ease, and in fact seemed to co-create itself, given the various powerful and favorable energies at play.

Limited edition, 18-inch square prints of Castiglia's 'Triptykon' painting can be purchased for $60 via the artist's Web store. Triptykon's 'Eparistera Daimones' will be released March 23 on Century Media Records.