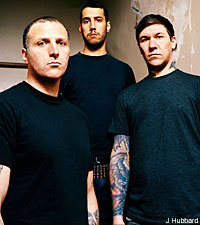 After a successful European tour with Buried Inside, Tombs are gearing up for a new set of U.S. dates this spring. The Brooklyn-based band will perform at Relapse Records' SXSW showcase, which takes place on Wednesday, March 17 at Red 7, and includes labelmates such as Voivod, Howl and comedian Brian Posehn. It's been almost a year since the band's Relapse release, 'Winter Hours,' came out, but its popularity continues to grow and garner good reviews.

Keeping up the momentum, Tombs frontman Mike Hill has upgraded some of his gear for upcoming shows. "I picked up a Boss DD-6 Digital Delay Pedal to replace the Rocktron Short Timer," he told Noisecreep. "I'm also back to the Boss [CH-1] Super Chorus Pedal. It lends that sort of later '80s sheen to the guitar sound, similar to 'Best Wishes' by Cro-Mags."

Hill recently recapped his band's experience with Buried Inside, discussing the difficulties of being both a performer and tour manager. Tombs had recently announced a U.S. tour with Krallice and Ludicra, in which they would be the main support for Norwegian metal band, Mayhem, but sources at Relapse have confirmed that Mayhem did cancel their tour. Tombs will continue to play SXSW and around those dates, but it's still uncertain as to whether Tombs will go forth with the originally planned dates in April.