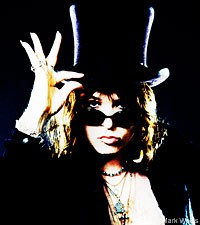 "A big rock show at an amphitheater in the summertime...there's really nothing quite like it," Cinderella frontman Tom Keifer tells Noisecreep. "There's more people, so there's a bigger energy. When you get right down to it, I like the bigger stages. Playing in smaller places like we'll be doing in March and April is really fun and I like doing it and it really gets you back to your roots because we started in clubs, but the big stages give you great lights and sound and production and [you can] just really put on a great show for the audience."

Cinderella started rehearsing for their now confirmed "comeback" well before Christmas. Forced on hiatus by Tom Keifer's vocal troubles, the band hasn't played live together in over three years. Now, Cinderella will do some warm-up shows in March and April, but the band is really looking forward to playing a major tour this summer. For the Cinderella faithful, a tour just isn't enough. Many of the diehards want a new record, yesterday. While Keifer says an album of all new material is definitely possible, don't get out your credit card to pre-order just yet.

"We always feel like a band when we get back together and tour so the plan right now is to not put any pressure on ourselves and to just get back out and have some fun, do shows and be a band again and we'll see where it leads. It's definitely a possibility we could make a record at some point, I just don't know when that would be. I would say it's gotta be right place, right time. It's gotta feel right," he says.

Keifer seems to use his gut more than his mind to make business decisions. The singer, who has battled countless obstacles to stay in the rock game, has been approached by a few writers to develop a book based on his story. For now, Keifer's saying no dice. "I've been approached by people and what I've told them is that I don't feel my story is finished so I don't want to write a book yet," he admits. "A couple of the writers that have approached me have been interested in the trauma of the voice loss and having to recover that. I'm not interested in that just yet."

A breath later, Keifer is off and talking about the upcoming summer tour again. It seems the singer is a little old fashioned and is trying to live life one day at a time instead of project to project or Tweet to Tweet, like so many of his contemporaries.

"I'm kind of chomping at the bit to get back on the stage with the band and to tour this year. A goal is to burn down a big tour this year and get my [solo] record released. Probably in the music area, that's my two biggest goals," Keifer concludes.


Filed Under: Cinderella
Categories: Interviews
Comments
Leave A Comment
Back To Top