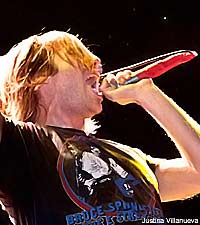 At Bowery Ballroom Sunday night, Thursday frontman Geoff Rickly admitted to the crowd that "the last tour we did was not as much fun as this one." Perhaps that was because the Taste of Chaos tour consisted of mostly 'tough guy' type of metal bands. Whereas, this fall Thursday is hitting cities all over the country with bands that tread rock-ier roads (e.g. the Fall of Troy and Young Widows).

When the New Jersey-bred, artsy emo band played 'Beyond the Visible Spectrum,' Rickly noted "this song is for our family members who are no longer here." He wrote it for his grandmother when she passed. "When music is there for you when you need it, that's best thing in the world."

I've always wondered if Rickly was as open at other shows as he is at hometown shows (being a Jersey girl myself, those shows are the only kind I've ever seen from the band). But, when Fall of Troy drummer Andrew Forsman affirmed that every show has sold out so far on the 'Common Existence' tour, I realized that Thursday is the same band every city they travel to.

"I love this city!" Rickly, currently a Brooklyn resident, exclaimed.

While their setlist included new songs off of 'Common Existence' and staples like 'Signals Over the Air' and 'Paris in Flames,' the encore was finalized with a special tribute to fans who attended their Christmas and New Years shows at Starland Ballroom: 'Jet Black New Year' off of the 'Five Stories Falling' EP.