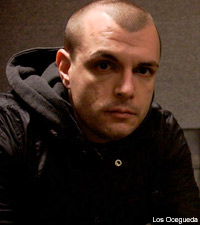 Orange County, Calif. stompers Throwdown contributed their rendition of the chunky anthem 'Becoming' to the Dimebag Darrell/Pantera tribute record cobbled together by Metal Hammer, the legendary U.K. metal rag. The mag is releasing a compilation of 13 Pantera covers in conjunction with their 200th issue and in honor of the anniversary of Dimebag Darrell's tragic death. The five-year anniversary of Dime's loss was on Dec. 8. The issue (and CD) will be on stands Dec. 16 and features the likes of Machine Head, Unearth and many others putting their stamp on Pantera classics.

Vocalist Dave Peters told Noisecreep, "We had a few ideas of what songs we wanted to cover, and few of them were already taken." The band initially wanted to offer their take of 'I'm Broken' or 'Becoming,' but another band nabbed the former, so they went with the latter.

"It worked out for the best, because it was fun to recreate those guitar sounds that are 'out there' for that song," Peters said. "It is a tough one to play and a hard one to cover live, but hopefully, we can make it happen [live] one time or another."

Peters broke down why the song is so hard to pull off live, saying, "The hardest part is the kick pattern on the drums. It's very signature Vinnie Paul. Any drummer, even some of the best double bass players out there, would have a hard time wrapping their head around what he does on the drums during that main riff. Also, making those guitar noises come out the right way live would be hard, too. We can do it, but we don't want to hack it live! 'It is a memorable and empowering song. That is what's cool about it. It cuts to the chase and gets to point."

Since the band was mulling over covering two anthems from 1994's 'Far Beyond Driven,' it begged the question. Is that the favorite Pantera album of Throwdown's members? It would seem so, but Peters revealed that he's enamored with a much less expected pick as his fave Pantera opus.

"'Far Beyond Driven' is an important record for Pantera," Peters said. "But it's not my favorite. 'Vulgar Display of Power' is the most important of their albums to me, and it changed my perspective on guitar playing and I love that record, but 'Reinventing the Steel' gets the most playback by me."

Really? 2000's 'Reinventing the Steel' is good, but is not truly regarded as essential album in the band's catalog. It's special in that no one knew it would go down as Pantera's final studio effort. "I wasn't a big fan at first, but I came back to it a couple years later and realized how mind-blowing the guitar work is," he reasoned. "Sonically, it is the best production-wise, too. It was their last stand as far as a record went, so it means a lot more now than when it came out."

Throwdown are currently wrapping up a tour with Bury Your Dead and will hit the road with Five Finger Death Punch and Shadows Fall next year.