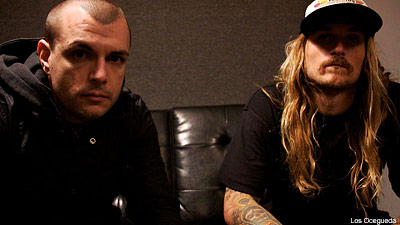 Throwdown had planned to spend the early part of their winter touring with Five Finger Death Punch and Shadows Fall, but the band quietly dropped off the trek -- with good reason. "We had some issues we had to take care of, and we could not justify leaving for tour," vocalist Dave Peters told Noisecreep without revealing any concrete details. "That tour was such a cool thing for us and we were excited to be doing it, since it would be different crowds than what we are used to playing and a crowd that could maybe appreciate our latest record in a different way than a lot of other fans on support tours we've done could."

With a genuine note of disappointment in his voice, Peters continued, "It was a bummer, but we had to put personal and family issues first. Yes, this is our career, so it was tough to not go on the tour, but we apologize up and down to the tour, the Five Finger camp and our fans. There are a million reasons why it's a disappointment for us. I hope that we can be forgiven by the [people who are] bummed and were expecting to see us."

Once things clear up, the band will return to supporting their latest, 'Deathless,' with an Australian tour and a trek through Latin America and Mexico. Regarding the land down under, Peters said, "I love it there, so I look forward to the nerdy, touristy stuff. We are going to go to Latin America and Mexico and to Central America and do some shows, too. I just got back from a vacation there, and I want to go back. So hopefully we can. To get to places that don't get music and tours as often as other regions and cities that are spoiled ... will be fun."