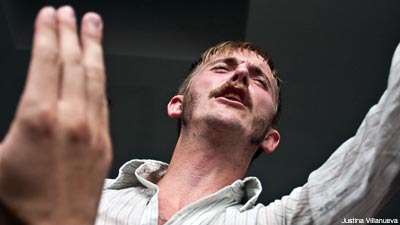 These Arms Are Snakes vocalist Steve Snere asked a bunch of New York fans Sept. 25, "You guys want to know why the Beatles broke up?"

Here comes the punchline. "Because their f---ing boots broke," Snere said while throwing his hollowed-out leather shoe to the other side of the stage.

The Seattle quartet's performance at Shea Stadium (a DIY venue in the artist-friendly neighborhood of Bushwick) was so explosive, it's tough to see how a sold out Mercury Lounge -- where the band played the following night in Manhattan -- kept the walls from splitting open. Only one song into the set, Snere already needed a new mic. When the sound guy couldn't get a new one going, Snere demanded that the show go on and played the next song without a mic. And yes, he was still screaming and jumping into the crowd as if a vocalist not having a mic was a usual occurrence.

"We're going to f---ing play two more. Just wait!" Snere shot back at him. With some guitar (Ryan Frederiksen) and bass (Brian Cook of Russian Circles and formerly of Botch) tuning, the Snakes boys were on their way to making everyone push each other again.

After punishing the loft space with their crafty post-hardcore and Snere putting a chair dangerously close to the end of the stage to hover over the crowd, These Arms are Snakes called it a night. You can catch them at a small sweaty venue throughout October with DD/MM/YYYY.

These Arms Are Snakes Tour Dates
on TourTracker.com