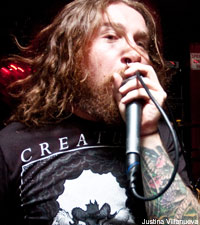 The_Network wanted everyone up close to the stage when they played the Precious Metal showcase at Lit Lounge in New York, N.Y. on Oct. 12. "Thanks for coming from the other side of the world to hang out in the back," guitarist Kevin Howley said in the direction of Robotosaurus members. After calling audience members all kinds of names and remarking about someone's "hipster purse," the band started.

When people came closer to the band, the New Hampshire five-piece assaulted the crowd -- literally. The moments of absolute chaos (of which there were many) left me in the dark. Both guitarists lifted off the set with their teeth grinding on their strings. Vocalist Mike McGee spread his stage to as far back as his mic cord allowed him.

For one song, Smash McKenny (guest vocalist and tour manager) emerged from the crowd. In a blink, half her face was bloodied. With a mic in her hand, McKenny crashed into Howley's guitar neck on her way back to the crowd. Her wailing screams added a plane wreck effect to their Dillinger Escape Plan-esque, Botch-y chaotic hardcore. Her voice also makes a cameo on the band's latest release 'Bishop Kent Manning.'