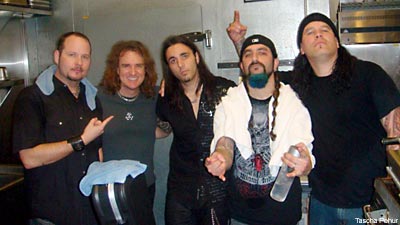 Last week was the music business convention NAMM, where musicians and instrument companies descend upon Orange County, Calif. The Letter Black, who will release 'Hanging by a Thread' on March 30, joined an all-star cast of rockers, including members of Papa Roach, P.O.D. and Atreyu, at the One Love for Chi benefit show for ailing Deftones bassist Chi Cheng, who is bed-ridden after a car accident in late 2008.

"Our manager Danny Hill is friends with the Deftones and decided to take advantage of the popularity of NAMM and schedule a benefit concert for Chi in the same town, on the same weekend," Letter Black vocalist Sarah Anthony told Noisecreep. "It worked out very well, because a lot of musicians were already going to be in L.A., so it was convenient for all involved."

Anthony exclaimed, "I was fortunate enough to scream for the Deftones tribute band, which featured David Buckner from Papa Roach, Marcos Curiel of P.O.D., Travis Miguel of Atreyu and Rene Mata of Static Summer." Letter Black guitarist (and Sarah's husband) Mark Anthony was also a part of a supergroup that night. Hail -- featuring Dave Ellefson of Megadeth, Mike Portnoy of Dream Theater, Phil Demmel of Machine Head and Tim 'Ripper' Owens -- had Mark play guitar for them, which was admittedly awesome. And for the Letter Black's own set, Traa from P.O.D. played bass. So it was a weekend of member swapping and newfound chemistry among members of different bands.

"The entire evening was just amazing," Anthony said. "It was such an awe-inspiring feeling, looking around at the packed house -- there was an estimated 1,500 people attended throughout the night, and many more were turned away -- and knowing that we were all there for the same purpose. In a world where everyone is so selfish, it was nice to see a ton of people, from all over, cram under one roof and be a part of this benefit for Chi, and as an artist, to be involved in such a great cause!"

In other Letter Black news, Anthony is stoked that the album is finally on its way to retail outlets. "It's been under construction for almost a year so you can expect a great product, not just one that's been thrown together and stuck on a shelf like so many records are nowadays," Anthony beamed. "We're very excited for the release so that everyone can hear what we've been working on. You can expect a hard rock record, similar to the EP." That EP, 'Breaking the Silence,' was released last year.

"The difference between the two would be that the full-length probably rocks a little harder that the EP," Anthony revealed. "It's meaty, gritty and you can't help but bob your head along with the rockin' rhythms. A lot of our songs talk about the past and how to move forward from it, even when you are so hurt you don't think you can."