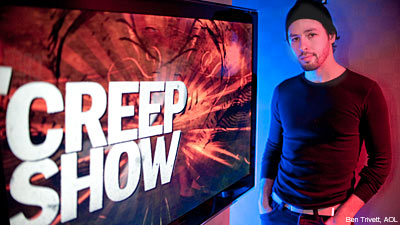 There were plenty of happenings in metal this week, and who better to have in our studio to talk the rock than charismatic, articulate Dillinger Escape Plan guitarist Ben Weinman. In addition to debating the finer points of the new Dillinger tour with Darkest Hour and Iwrestledabearonce, we addressed two even bigger tour-related stories. Iron Maiden announced that they're going to be launching a North American tour to support their upcoming album 'The Final Frontier,' and Rob Zombie announced that Slipknot drummer Joey Jordison would be sitting behind the kit on his upcoming shows with Alice Cooper and the Rockstar Energy Mayhem Festival.

But this week's ''Creep Show' was special for more than just its great guest artist and killer news content. After more than a month of shooting the podcast in whatever conference room, hallway or stairwell of the AOL building that wasn't being used, our podcast room has finally been renovated, and damn if it ain't comfier, spiffier and more high-tech than ever. The mics are bigger and don't dangle in front of our faces, there are two mounted ceiling cams and a floor cam. There's even a pair of flat-screen TV monitors that flicker with lightning bolt-enhanced animation of our logo. Sweet!

In addition to concert news, we talked about former Warrant singer Jani Lane, who had a warrant issued for his arrest after he failed to show up for court on DUI charges, and the fan who was arrested at an Ozzy Osbourne book signing for sparking up a joint in public.

Then it was time to talk to Weinman about Dillinger and their new album 'Option Paralysis,' an astounding clusterf--- of mayhem and melody. During our chat, the guitarist and primary songwriter explained why the band turned down major label offers to work with French indie metal label Season of Mist, how the group's last record 'Ire Works' set the stage for the 'Option Paralysis' -- and how the metal community is being glutted by predictable, uncreative releases. We also talked about how great art needn't be accompanied by crippling pain and why Metallica threatened to sue Weinman for printing T-shirts for puppy dogs.

Exercise your option and catch it all now.