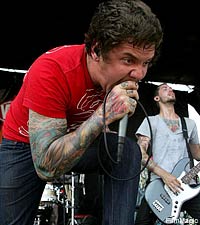 The Devil Wears Prada are about to embark on one of the band's biggest tours opening for Killswitch Engage. But in a recent interview, frontman Mike Hranica was asked how the hardcore and metal scene is in Ohio, where Alternative Press' best band of 2009 began. "Not so good," he replied, showing a happiness to be living in Chicago, away from the admitted scene that once inspired him.

"There are some good bands that come out of there, like Dayton and Cincinnati," he explained. "It sucks because there is so much hate. The older people hating the younger people. It is weird. I wish I had a better way of describing it. Other than people hating and being more hateful than what they should be. As compared to when I was younger, and it seemed [like a] more fun Christian scene. It is different now."

Also in the interview, Hranica let off a little steam about the image he observed playing Warped Tour over the years. "You can go to the Warped Tour and see bands that are absolutely doing nothing good for this Earth. They are not putting out a positive message. They are not helping people." But he still feels the band will return to the touring festival at some point, but opening for older and more established bands is where he sees the Devil at right now, saying, "That is something that we are really trying to grow into."

The tour with Killswitch Engage and Dark Tranquility is on wheels until March 21.