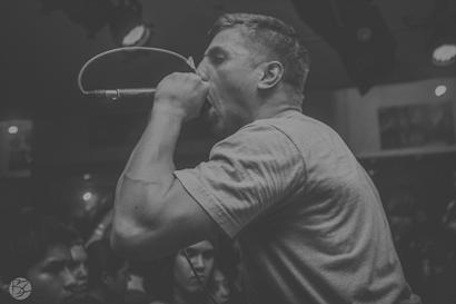 The Contortionist guitarist Robby Baca stated, "We're very excited about this announcement. The run of dates we did with him as a fill-in were a much-needed breath of fresh air. He brings to the table all kinds of new dynamics that will help fuel the progression of the band's sound onto the next record and onward."

The group's previous frontman, Jonathan Carpenter, exited the band this spring to be with his girlfriend for the birth of the couple's first child and to focus on his home life in the immediate future. As the band had already booked dates, they called in Lessard to help them fulfill their responsibilities, but the relationship blossomed over the course of the trek.

Lessard stated, "I've been a friend and fan of the band for a long time, so these are exciting times. I can't wait to hit the road and the studio with these talented gentlemen. I believe this to be the start of a beautiful experience."

Speaking to Metal Sucks about what this means for Last Chance to Reason, Lessard added, Last Chance to Reason will just be a secondary priority for me. I'm focusing on The Contortionist for now. The [other] members of Last Chance have other things that are keeping them busy at the moment. Evan [Sammons, drums] has an awesome job opportunities for himself and Chris [Corey, bass] has another child on the way this September. It gives us room to do Last Chance as kind of a 'whenever we have free time' type of thing."

While Last Chance to Reason are scaling back their activity, they do have some dates this summer with The Contortionist's Robby Baca sitting in on guitar, and a new album will arrive in August.

The Contortionist return to the road this fall, supporting Between the Buried and Me. Dates for that trek can be seen here.