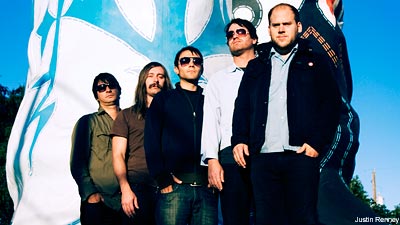 On Aug. 25, Los Angeles hardcore punk outfit the Bronx will release a record that sounds nothing like their previous three self-titled offerings. Called 'El Bronx,' the LP sees the band transforming into their alter ego, Mariachi el Bronx, and abandoning their signature sound for mariachi-infused melodies. For frontman Matt Caughthran, it's fun being in two different bands with the same dudes.

"Really, we're both bands," he tells Noisecreep. "We're Mariachi el Bronx and we're regular Bronx. It's two different bands, but there's no official on or off."

The idea to release an entire album's worth of authentic mariachi music came to the Bronx following an on-air appearance they did for Fuel TV. "It was kind of an acoustic thing," says Caughthran. "The treatment for rock bands doing acoustic music is so horrible, and so generic. And it was something that we really wanted to stray away from. So we got some friends involved and did a mariachi version of 'Dirty Leaves.' And when we did that -- the transformation, creatively -- it was super inspiring, and it was something that we wanted to explore further."

Guitarist Joby Ford and Caughthran began working on mariachi tunes, coming up with melodies and lyrics. "Before you knew it, we had three or four songs in one day. It happened real organically, and it started taking off and snowballing, and we kind of just went from there."

The Bronx had to do some research on mariachi music before recording the tracks, the singer says. "We had a basic knowledge and an inspiration there for the music ourselves, but for the first time in our creative lifestyles, there were actual rules," explains Caughthran. "There's no rules in punk music. You just plug in and make as much noise as you can. In mariachi music, there's definite rules ... there are rhythms you have to obey and things you have to do right, or else you can't call it mariachi, and you'll just look like an a--hole."

But after these next few months of international touring, Caughthran says the Bronx will get back to business, and return to their punk rock roots.

"After this, there's gonna be regular a Bronx four record," he says. "I think it's going to be the gnarliest record we've done ever. I think coming off of writing all this soft music, we're going to really want to go as nuts as we can. That's what we're looking to do. After that, who knows what we'll do."

The Bronx Tour Dates
on TourTracker.com