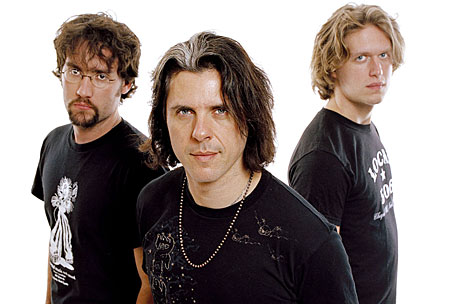 After playing on the first four Testament albums, guitarist Alex Skolnick decided to leave the group to explore other areas of music. Skolnick's newfound interest in jazz guitar eventually led to the formation of the Alex Skolnick Trio, a purely instrumental jazz group.

Originally, the trio recorded instrumental jazz versions of popular rock songs by KISS, Scorpions, AC/DC, Judas Priest, and Metallica. However, the band's most recent CD, 'Veritas,' features all original compositions with the exception of a cover of Metallica's 'Fade To Black.' Skolnick recently spoke to Noisecreep about the new album, his appreciation for music other than metal, and his interest in Bollywood.

Noisecreep: Was your interest in jazz-fusion music something you never got to fully explore until you were out of Testament?

Alex Skolnick: I think it was something that requires a lot of development and ability, to be able to play music like that. I was always listening to it. All of my personal listening at home was that kind of music. When I'm with friends at a party or a metal bar, I'd want to hear loud headbanging music. But not the first thing when I get up and during the day. I tried to learn it but it was really frustrating. I played like a beginner. It took years and devoting myself to it, [playing] nothing but that type of music.

Did you find the other two guys in the band while you were studying music in New York?

I found Matt [Zebroski]. He's the drummer. We were both in school. I [left] California and moved to New York. I surrounded myself [with] music. He's a bit younger, in his early 30s. We had a lot in common. He was different from most of the other students. I was [different too], because I was in a metal band. We started to write together. We had two different bass players that were in school with us. One recorded a demo with -- he was a great player but he didn't work out. [Then] we started working with [bassist] Nathan Peck and recorded with him.

'Veritas' has more original compositions than the previous CDs. Is 'Fade To Black' the only cover you did this time?

That is the only one. We almost didn't do that one! We were going to do an all-original album but we thought it didn't hurt to just try it. So we tried it and it felt so good. So we kept it. It's the last of the covers, and it was the perfect title.

It's a cool rendition of it. It sounds like the original but it also sounds like your song too.

People often say that. We did 'Electric Eye' by Judas Priest. Even Rodrigo from Rodrigo y Gabriela said, 'That sounds like your song.'

I remember at NAMM you did the 'Detroit Rock City' cover.

Right. That was one of our earliest arrangements. The first songs we ever re-arranged were by Scorpions. We did 'Still Loving You.' Then we did 'No One Like You.' They went so well that we decided we needed to do more of these. I remember at some point noticing that the original interludes to 'Detroit Rock City' also had these flamenco chord progressions. We realized that this melody works over a swing jazz arrangement. Then it started getting played on public radio stations and [getting] a lot of attention. It got in with mainstream jazz publications.

The original songs seem to have a New York influence judging by titles like 'Only In Brooklyn.' Do you feel like living in New York has a real influence on the songs?

Absolutely. 100 percent. I don't think I could do this if I lived somewhere else. There's a lot to be said for it. The energy is very contagious. I used to think it made no difference, [that] you could put me in a cabin in Montana and the music I create would be the same. That's completely wrong. You are definitely affected by your surroundings. I noticed [that] early on in the '90s when I first started visiting New York regularly. I was meeting a lot of interesting musicians. Everybody was passionate about music. I'm very fond of the Bay Area, but maybe because I grew up there... I was over it [laughs]! So I go back to New York, thinking I'm growing by leaps and bounds. Maybe I just need to be there. Looking at it now, it's no question, it's the best thing I could have done.

I noticed that you reference Bollywood in a couple of your songs.

I get a kick out of it in the same way as the Hong Kong martial arts films. These genres of films are campy but kind of cool. That's why I like about some of the Hong Kong films. They're so violent, but even if they beat each other up, they'll apologize because they're on the same team. It's ridiculous, but I like that. I've been interested in Bollywood, such as the movie 'Slumdog Millionaire.' The music was composed by A.R. Rahman, who is the leading Bollywood composer. I wanted to do a song where you have a street full of colorful costumes with people dancing in synchronization.

What was your initial feeling after picking up these new skills on guitar, and then returning to play in Testament in 2005?

It was interesting. It's been so long. It felt like a new style. It took a few days before it felt comfortable. Once it did, it felt better than it had. All the work I had done on jazz started to kick in. I realized I didn't need to play exactly as I played them. There was so much room for improvisation. When you hear me play, you'll recognize the song. But no one will say it's not the same solo, but there are little embellishments that I may throw in that I may not have been able to do before. I think I feel more in tune with how I express the music. That's what was exciting. When I first started playing with Testament again after all of these years, I didn't know how long it was going to last. I thought we would do a couple of reunion tours and see how it goes. Everybody started feeling the energy. It became a part of what I am supposed to be doing.

Kirk Hammett has championed the Alex Skolnick Trio. Do you know him from the Bay Area?

I never knew him well actually. We would cross paths occasionally, but by the time Ride the Lightning came out, I was a sophomore in high school. They started doing well, which was a pleasant surprise.

Has he ever joined the band live for an appearance?

No. That would be great. [Metallica bassist] Robert Trujillo joined us in New York. He was a special guest with Rodrigo y Gabriela. So he soundchecked and we were all set up to soundcheck right after him. He just walked up to our drummer and said 'play me something.' They started playing and then I joined in. Then Nathan [Peck] joined in on bass. I have that on video! It's an awesome jam.

Watch the video for 'Veritas'