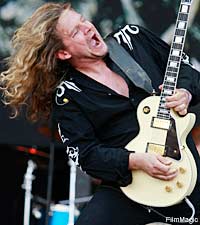 The pop metal band Tesla is planning a pair of CDs to celebrate live performances throughout Europe last summer and the U.S. this fall. "We're doing two live albums," guitarist Frank Hannon tells Noisecreep. "The first one is strictly for Europe; it may be available as an import [to America]. We are going to do a second one. It's going to be for America next year."

Tesla -- which includes vocalist Jeff Keith, guitarist Dave Rude, bassist Brian Wheat and drummer Troy Luccketta -- is focusing on the European market first, out of commitment to its record label. "Our record company's in Italy," Hannon said. "They're really good to us, and we're going to give them the first crack at it. It'll eventually be available over here."

The Sacramento, Calif.-based band is in the midst of working on the European album for release this year. The CD, tentatively titled 'Live Across Europe,' features performances in Belfast, Hamburg and Madrid, among other cities.

"We're working on mixing the live album," Hannon said. "We just got done touring in Europe for five weeks this summer. We recorded every show and we just got done sorting through it. Now we're mixing it to make a live album in Europe. We have to divide our time. I'm kind of learning that as I get older. You have to set aside time for certain things in order to stay focused. You go, 'OK, this time I'm only doing this.' 'This time I'm only doing that.' Right now, this one time, we're not writing songs as a group but we are mixing some live material.

"We're gonna do the same thing in October," he added. "We're going to record the Michigan show [at Clarkston's DTE Energy Music Theatre on Sept. 5]. We're pretty much going to record every show on the tour. We have a recorder set up in our mixing console."

Fans can expect the live recordings to include tracks from Tesla's latest album, 'Forever More,' as well as, as Hannon dubbed it, "so-called hits." Then it also features two to three obscure songs.

"Every night we would change up the set list," said Hannon, who also fronts the Frank Hannon Band. "Songs like 'Shine Away,' or we would do just different stuff like 'Call It What You Want,' different things that were not hits but obscurities that the die-hard fans would like. That's kind of our formula. We do five or six songs off the new record, then five or six of the ones we gotta do, like the 'Modern Day Cowboys,' the 'Love Songs' and the 'Signs' and stuff like that. Then two or three songs that are unexpected.

"It makes it fun for us," he added. "It's a little bit of a pain to organize the set list, which is my job on the computer. Somehow I inherited that job. I've always been the musical director guy with the band. We have a lot of interesting parameters here: What can we play? What can we still even actually play? Some of those songs are pretty difficult to sing and play 25 years later. It depends on the mood. I have to talk to Jeff, our singer, 'How do you feel about doing this song tonight?' 'Ah no, I'm not really into it.' 'How about this?' 'Yeah that'll be great.' Every night is a little different."