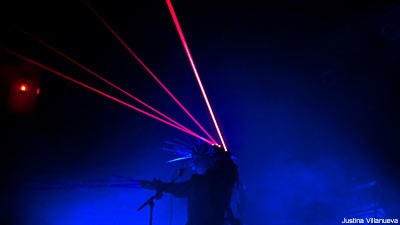 Before the music started, smoke machines pushed out enough fog to fill Brooklyn Masonic Temple Sept. 22. The same venue where Repulsion played 'Horrified' in its entirety, sold out for the biggest doom show of 2009: Sunn 0))) with Earth, Pelican and Eagle Twin. With about 1,200 fans packing the place, it was impossible to see the person next to you at certain points because of the fog and darkness.

After 10 minutes of droning samples coming from the still empty stage, someone shouted, "One more song!" Needless to say, everyone was growing impatient with the extra long introduction. Then after a long silent pause someone shouted, "Play some f---ing music!" A reign of stark ambience shuttered in, and life forms walked onto the stage.

A Sunn 0))) show has always consisted of two dudes (Greg Anderson and Stephen O'Malley) in robes, surrounded by stacks of amps, making super heavy drone -- the kind that will nauseate your stomach and set your back straight. That is, until the band's most recent U.S. trek, where 'Monoliths and Dimensions' guest vocalist Attila Csihar (Mayhem) joined the duo onstage. 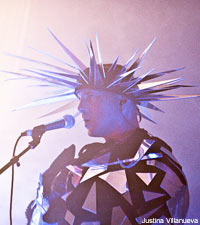 Ever the master of disguise, Csihar first walked onstage with a hooded robe. Ehh, typical. A little further into the set -- when the stage got even darker and cloudier -- he re-entered, covered in triangular mirrors. What seemed to be a Statue of Liberty-inspired by a costume designer who had a bad acid trip on a Staten Island ferry ride was actually Csihar in an outfit that could have been shown at a Parisian avant-garde fashion show. Multiple red laser rays of light bounced from his hands to the mirrors, creating intricate line designs.

His final costume was truly evil. Imagine a hellish half-human, half-reindeer ghost from a childhood nightmare that still haunts you. Even as an adult, you know it's not real, but the fear doesn't leave.

Apart from the visual theatrics, the sound of Sunn O))) haunts one for days. O'Malley and Anderson raised their guitars like they were about to sacrifice them. And that is exactly what the Blackened Fest series concert-goers did Tuesday night: sacrifice their ears and stomachs for a night of true doom.