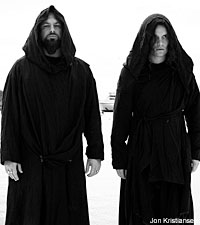 When Greg Anderson and Stephen O'Malley formed Sunn 0))) in 1998, they had no idea that their genre-defying brand of experimental doom would exist over a decade later. But as their seventh album, 'Monoliths and Dimensions,' draws closer to a release (May 26), Anderson says they didn't necessarily care about leaving their mark on music, either.

"When we started, the expectations were really minimal, and they still are," Anderson tells Noisecreep. "I like to keep things like that, so when things do happen or cool opportunities come up, it's a surprise." And Sunn's longevity and success is beside the point, given that their target audience is two people: themselves. "For Sunn, it's been a much more selfish, personal thing," Anderson says.

"We make the records because we want to make them, and it's really for us. The fact that people are connecting with it is amazing and I'm so grateful, but at the same time, we really don't give a shit what people think about us. And it's totally ironic that with that attitude, that this has become the band people are connecting to the most. But at the same time, if they didn't and no one cared, we'd still be doing it. We'd be doing it on a different scale, and maybe no one would know about it because it would be me and Steve with a bottle of wine and a bunch of pills in the studio."

While you won't be hearing 'Monoliths and Dimensions' blasting out of a Hot Topic or featured in a National Guard ad anytime soon, Anderson has noticed an increased acceptance of heavy experimental music since Sunn's formation. "Sunn and [bands like] Earth and Boris and Pelican and Isis and Neurosis are offering something different, and it's attractive to people, because they don't want to hear the same old shit," he says. "I think what we're offering and bands in this scene, if you want to call it that, are offering is something different for people to listen to. What we're doing now and these other bands are doing is fusion. It reminds me a lot of what happened in the mid-80s with punk and metal. Punk and metal fused together, so punks started listening to metal and metalheads started listening to punk. It's very similar. It's a fusion of different styles of music. Sunn is embracing experimental music; we're embracing post rock, and free jazz. When you embrace different styles, different people are going to get into that music."