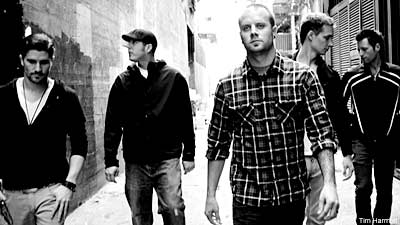 Story of the Year have had the same five members in the band since 2002, which is an eternity when it comes to a touring, grassroots band that doesn't rely on commercial radio airplay to survive. The membership of the band is like the name of their new album -- constant!

"We are lucky," vocalist Dan Marsala told Noisecreep. "We all get along pretty well, and we tour with bands where half the band can't stand each other. It's like, 'Oh, I don't talk to him, because we don' get along!' That's not us. Me, [guitarist] Ryan [Phillips] and [drummer] Josh [Willis] went to high school together and have known each other for a long time. There is a lot more there than music. We were always skateboarding and were friends, and then the music become more serious."

While membership may be constant for Story of the Year, their tourmates aren't. This is a band who can tour with straightforwardly metal bands like All That Remains as easily as poppier bands like Anberlin. "We are a confused band for sure," Marsala admitted with a laugh. "We have a lot of influence from all sides. There are some hardcore punk influences, with songs that are full-on fast, and there are others with elements of metal -- but we don't get too metal! But the influence is there, guitar-wise. But we can also be piano-driven and melodic and straight ahead rock."

The band has actually toured with ATR and the Devil Wears Prada, which keeps things interesting, at least for the fans and the band. "We cover it all and keep it interesting for us! Keeps us around. We're not married to one genre," Marsala said.