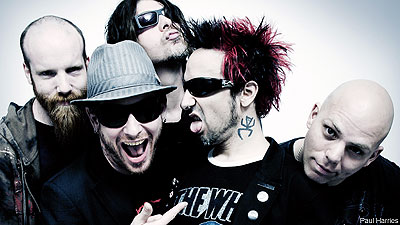 Stone Sour are still busy tracking 'Audio Secrecy,' their third studio album and follow-up to 2006's 'Come What(ever) May,' but this week they're giving Noisecreep an exclusive video from the recording sessions. Bassist Shawn Economaki is our friendly tour guide through Blackbird Studios, the state-of-the-art Nashville recording compound where the platinum hard rockers are still hard at work. In the clip, Economaki introduces us to engineer Paul Figueroa as he's listening to one of the new Stone Sour tracks through the studio's massive mixing console.

We're also introduced to Martin Connors, one of Stone Sour's guitar techs, who is busy tuning one of their many axes. In another section of the exclusive webisode, you'll see Economaki laying down some bass to the playback of an as-yet-untitled new track off the upcoming album.


'Audio Secrecy' is being produced by Nick Raskulinecz, who has worked with everyone from Foo Fighters and Rush to Bay Area thrash gods Death Angel. Stone Sour vocalist Corey Taylor said about the album, "It's the summation of everything we want, everything we crave and everything we fight for. The dimensions go further than anything we've ever tried before. It's metal, rock, slow, soft, hard, fast, bitter, beautiful and most importantly, it's real. You can't get an album like this out of a band that doesn't exist. We're throwing caution out the damn window."

'Audio Secrecy' will be out this summer via Roadrunner Records.