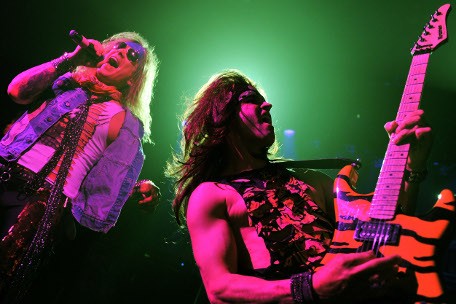 The Sunset Strip's hottest export, Steel Panther, are looking to further their quest for worldwide domination with the release of their first-ever DVD, Steel Panther - British Invasion, via Guitar Anarchy Studios. Rumored for release multiple times in the U.S. in 2010 and 2011, the DVD finally sees the light of day stateside on Oct. 22.Recorded with 16 cameras in pristine HD over a 2-year period, the DVD chronicles Steel Panther's legendary live show that the band has come to be known for. Beginning in March 2010 at the band's sold-out show at Brixton Academy in London during their highly successful "Feel The Steel" tour, the DVD feaures some of the band's most memorable hits including "Asian Hooker," "Community Property," "The Shocker," and "Stripper Girl" in a way never seen before. Included in the package is a laugh out loud documentary that follows the band backstage and on their tour that is not to be missed.

The Deluxe Box set includes 2 DVD's- One with the full show and one with the documentary, deleted scenes and 5 songs from Download Festival 2012. The packaging also includes a 16-page color book. The DVD will also be available in Blu-Ray at the same time. Steel Panther – British Invasion was directed & produced by Award-Winning Director Daniel E Catullo III (Rush, Nickelback) and was mixed by Jay Ruston who worked with the band on both of their previous records.Watch Steel Panther - British Invasion Trailer

An official DVD website has been set up specifically for the DVD release, www.steelpantherdvd.com, with a pre-order starting today as well. Fans who pre-order the DVD on the DVD site will receive a limited edition signed poster of the band for free. New videos will be released every week up until release day to give the fans a sneak peak at the DVD and updated information will be posted on the official DVD site.

Steel Panther is currently gearing up for their 2nd World Tour of 2012. The tour kicks off in Auckland, NZ, on Oct. 2, and the 25+ city trek runs through mid-November and makes stops in major markets all over Europe and Australia including Auckland, Brisbane, Sydney, Perth, Helsinki, Amsterdam, Manchester, Paris, Zurich and Bristol before wrapping up in London on Nov. 15. Head to the band's official Facebook page for all of the dates.