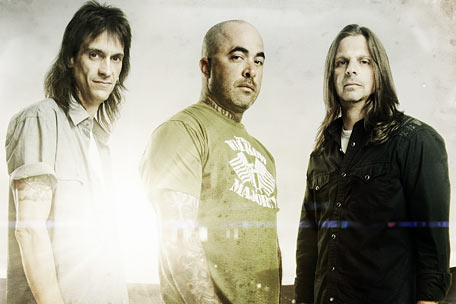 It's a rare thing for a band to release their strongest collection of songs seven albums into their discography. But then again, Staind was never the type of group that bought into those kinds of excuses. Next month they'll be unleashing a self-titled album that finds the melodic hard rockers delivering one stunning track after the other. It's the kind of record that is stuffed to the gills with potential singles, but still has the cohesiveness that all great albums have.

Noisecreep is excited to exclusively premiere the video for 'Not Again,' one of the finer cuts off of 'Staind.' Vocalist-songwriter Aaron Lewis told us about the song and video clip. "Making this album was hard. I guess you can say 'Not Again' is a direct reflection of the events that transpired during the recording process. The video was done by Paul Brown, we shot individually on green screen, we went in ran through the song a few times each and were done. I don't know why we've wasted our time making videos any other way all these years," says Lewis.

Earlier this month, Noisecreep spoke with Staind guitarist Mike Mushok and he gave us some insight on working with Lewis. "We just pushed each other across the board to do something special. I hear it in Aaron's vocals. You believe everything he is saying. And when we sat down to arrange, he would tell me to forget our older patterns of doing things.

I know exactly how to write music for him since we've been together so long. This time he said. "Write it how you like it. I'll figure it out from there." And that so that process resulted in something a little different, too... something fresher. Also, our producer Johnny K worked unbelievably hard, trucking back and forth between Aaron's studio up north and where I was working. That guy was always doing double-time."

'Staind' will be out on September 13th via Atlantic Records. Pre-order the album from the band at this link.