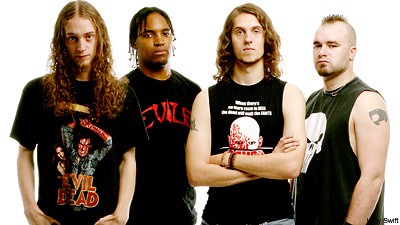 ON THE HORIZON: In an official press release, UK thrashers Evile are preparing to record the follow-up album to their 2007 release, 'Enter The Grave.' With a tentative release date for late 2009, the album will be produced by Russ Russell (Dimmu Borgir, The Exploited, Napalm Death) and coming out on Earache Records.

IN THEATERS SOON: Influencing the likes of Thrash founding fathers Metallica, Slayer, and Anthrax, Canada's Anvil have released a doc/mock/rockumentary accounting the band's journey from beginning to present day.

GONE SOLO: Metal Church lead vocalist Ronny Munroe recently signed a deal with Rat Pak Records for his first solo effort titled 'The Fire Within.' Set for a release date in April, Munroe brought guitarist Rick Van Zandt on board for the album's production. Plans for Metal Church's upcoming tour in support of 'This Present Wasteland' will still continue to be put on hold in lieu of guitarist Kurdt Vanderhoof's present health condition until May of this year.