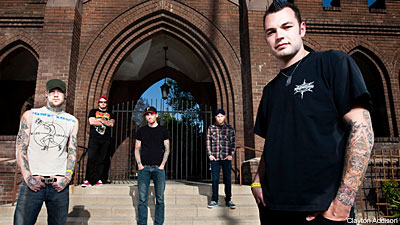 Sleeping Giant lead singer Tommy Green admits he felt "cheesy" mimicking lyrics during filming the video for 'The Army of the Chosen One,' a song that appears on the Christian hardcore band's album 'Sons of Thunder.' But he pulled it off for the sake of his fans. "I was so nervous," Green told Noisecreep. "I've never done that before. I felt so embarrassed and stupid. They tried to set it up so it would be easy for us. I felt cheesy as all get out. But I just went for it, for the sake of people who would see it and say, 'That's cool.'"

The video, which Noisecreep is debuting, was directed by T.D. Benton of the Christian performance group White Collar Sideshow in San Bernardino, Calif., near the band's hometown of Redlands, Calif. Ryan Clark of Demon Hunter makes a guest appearance on the song.

"We're friends with some of the guys at Solid State," Green said of Demon Hunter's label. "We finished a show with Demon Hunter a few years ago, so we know some of the guys in the band. We're just thinking of people [who could make guest appearances]. When I wrote this song, I heard his voice. I was like, 'It would sound phenomenal if he would be able to do a guest spot!' We just hit him up and asked him. I'm just glad that he did it."

Green explained that the video accurately captures the essence of the song. "The message in the song is essentially that it's a callout to all of the people that are part of our generation, young and old, not to be lulled to sleep by sort of the circumstances and disappointments and business and all of the cares and worries that surround our life," Green said.

"There's a higher calling and a better reality for all of us -- that reality is the relationship with God and heaven. There's something bigger for all of us. We've been praying for years and years that people would not fall into the same cycle over and over again. It's an anthem and a callout to my generation that they understand there's something bigger going on. They're meant to be a part of it. It's eternal and it's really important. The irony is we want to show everyone in the generation of people who have given themselves completely and totally to their relationship with God, but not in a foolish and showy way. It's supposed to be authentic and real, a real relationship, where you would die for your friend. We're hoping people would actually hear that message."

Green said the song 'The Army of the Chosen One' carries over the theme of the band's first album, 'Dread Champions of the Last Days.' "There's a movement in the Earth that I think God's doing, and he's raising up really radical people that are going to do and make the same mistakes that were made of past generations," Green said. "But they're going to represent unconditional love and the grace of God and miracles and the power of God working in people's lives. It's going to be really awesome."

This fall and winter, Sleeping Giant is embarking on a tour with Winds of Plague, Stick to Your Guns, Oceano and Circle of Contempt. Green said fans can expect to see "a different side of Christianity."

"Expect to see really crazy and miraculous things happen at the show," Green said. "Expect to see good songs and a fun time. Expect to see people who don't know Jesus who might get to know him. It's part of who we are and it happens all the time. There's parts of every show where people are looking for some sense or some picture of, 'Who is this God, and what is all the fuss about, this guy?' Then a lot of times they have questions that need being answered. My expectation is that we will introduce people to our friend and if they like him, they may begin a relationship with them."