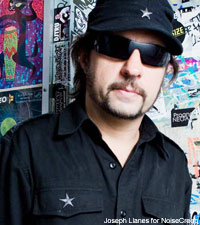 When Noisecreep recently met up with Slayer drummer Dave Lombardo in the green room at Los Angeles' Amoeba Records for a video chat, we had to ask him about the recent online furor he created by offering Metallica drummer Larus Ulrich some drum lessons. The first thing we wanted to know was whether or not Lars accepted the offer yet. "Oh man, no he hasn't," Lombardo said laughing. "Yeah, but that was all done as a joke, not really as a joke. It's just me having fun."

So how did it get started? "Of course someone asks me about Download Festival," Lombardo recalls, where he once filled in with Metallica for an ailing Ulrich. "It's like, 'Yeah show him how it's done.' [But] I don't need to show him, he's amazing but there's always that kind of rivalry, that fun rivalry."

As one of the world's most renowned drummers, Lombardo gets asked frequently for his favorite people behind the kits. "I've been meaning to make a list of drummers because I get asked that question all the time," he says. Without a cheat sheet in front of him though, a few people still came to mind. "Well of course the drummer in Jucifer [Edgar Livengood]. I like Dale Crover from the Melvins. Dave Grohl as a drummer, I just saw him with Them Crooked Vultures, he's great, a really, really good musician. Gabe Serbian from the Locust, real punk kind of band, strange, really fast, short songs, straight to the point."

Jucifer is a wonderful two-piece band that many people might not have heard of, but Lombardo says it's a band that really blows him away. "It's a female singer and her husband. It's very kind of very slow, grungy. They're from Athens, Ga., amazing." And one thing that is not surprising for a musician who has frequently explored side projects or other bands like Fantomas or his love for jazz, is Lombardo, despite playing for one of the heaviest bands on the planet, is open to all types of music, including some his kids turn him onto.

"They just let me borrow the new Wolfmother. They're into all this newer stuff which I really don't like, but I give it a chance and I tell them what I don't like about it," he says. But he's found a few bands he likes. "One of the bands that I do really like a lot that they turned me onto is Fall of Troy, they're really cool. There's some other bands, too, Pierce the Veil, the Muse, the Almost, Chiodos."

As a working musician doing an interview in the green room of a record store, he has a very important message for his kids as well. "And they buy CDs, too. I tell them, 'You make sure you buy CDs.'"