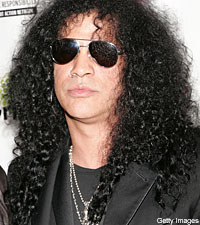 Slash will be hosting a rock 'n' roll jam Nov. 22 at L.A.'s Avalon with Ozzy Osbourne, Dave Navarro, Chester Bennington, Billy Idol, Tom Morello, Perry Farrell, Wolfmother's Andrew Stockdale and more. While the iconic guitarist has done a few other of these Slash and Friends shows over the past year, this one is particularly special to him as it benefits the Los Angeles Youth Network, a group that helps homeless teens in L.A.

For the guitarist being around the kids brings him back to his own youthful days. "I took to the streets when I was really young. I just liked to sort of be out there. But in my travels when I was like 12, 13, 14, those years, I remember hanging out with kids that were homeless and hustling and doing all kinds of crazy s---," he tells Noiscereep. "The one thing they never had was any really solid choice to be able to get their lives together and one of the things that happens to kids when they're stuck in that situation where they have to survive, the easiest and most accessible way of doing things is all the bad shit."

But he believes LAYN makes a difference. "So what happens with LAYN is they take these homeless kids off the street and give them sort of a chance to start taking some actual responsibility for themselves and have resources that are better than drugs and crime and that sort of stuff. So it's very cool and I really relate to it because this is all happening in Hollywood, where I was pretty much raised, so I've seen it all."

As have his fellow musicians on the bill. "I think all the musicians I'm working with on this thing can relate because we're all musicians," he says. "We all of a sudden managed to be successful doing something where the odds are against us. So if it was sketchy at best when you were a kid you picked up the guitar and if you hadn't been able to be successful at guitar chances are you'd be turning to either a day job, which I doubt that's going to happen, or something else, whatever that might be. But it probably wouldn't be savory."

As important and worthy as the cause is, Sunday night also promises to be a great rock show. "All the different artists usually perform at least one or more songs of that artist from their catalog and there'll be some [Guns 'N Roses] in there and some Velvet Revolver, from my catalog," he says. "Then there are also some cover songs, whatever anybody just really wants to play. And it's very loose and fun and no pressure, so it makes it for a really, really entertaining gig."

And the guy who will have the most fun? Slash. "As a guitar player and more importantly, as a rock fan, which basically at the core that's all I am, it's just great to get up with these people that you respect and admire and listen to and that you learn from, people that are icons that you went out and bought their records and all that kinds of shit," he says. "I love doing it."