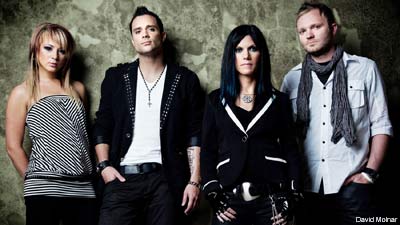 Touring the U.S. for several months and hitting 52 cities on said tour is a daunting task for any musician. Imagine how tough it must be when you're in a band with your wife -- and you take your two homeschooled kids on the road with you! But Skillet vocalist/bassist John Cooper and his wife, keyboardist/guitarist Korey, make it look like a cinch.

"Before tour, me and my wife argue a lot," John Cooper told Noisecreep with a laugh. "We think, 'Oh Lord, we're about to do this? Go on tour for three months, all the while homeschooling our kids while on the road?' But we gotta do it to get our name out there! It's a lot of work and requires incredible prep because of the kids. I think about the tour and how we are going to hit the West Coast, East Coast, North and South, and Texas to Michigan on this tour. So I gotta pack clothes for summer and winter, along with stage clothes.

"Some shows will occur at the end of festival season, which means some outside shows, too, so I have to bring clothes for that. I also have to work out and go running during the day, so I need those clothes. In addition to all of that, I have to pack all the same crap for my kids!"

The Cooper kids like the rock 'n' roll life, despite being 6 and 4 years old. "They get excited about the bus," Cooper said. "They love it for a month, then they miss home. They get home and miss the bus. My son likes to rock! My daughter has toured with Saliva, Seether, Flyleaf. She is a veteran at age of 6!"

Skillet's eighth album, 'Awake' is in stores in September. Cooper attests to the fact that Skillet have built their career by good old fashioned touring. "We've never had a radio hit, but we do have a hardcore fanbase. We toured heavy for ten years, creating that live show," Cooper said.