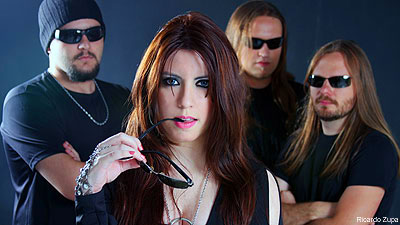 "Sometimes it's fun, because they don't' expect a woman to sing like this. They expect a Nightwish clone." Shadowside frontwoman Dani Nolden told Noisecreep.

Shadowside aren't exactly your average female-fronted metal act. The Brazilians mix straight-ahead metal with prog and a hint of the '80s to create a completely unique sound. Sure, the band formed in 2001 -- when it was trendy for women to lead metal bands featuring a bunch of guys in the background -- but Shadowside do not hop trends. In fact, they've gone out of their way to avoid trends.

One way the band is trying to succeed on their own is to mix an aggressive tour roster with recording. The band writes nearly every day while on the road and released 'Dare to Dream' in 2009. While 'Dare to Dream' isn't even a year old, the members of Shadowside will soon reconvene in the studio, with hopes of releasing a new album by the end of 2010. Just don't expect Nolden to sound more ladylike the next time around.

"People would listen to us and say, 'Where's the other singer, what happened to him?' There was never another singer in Shadowside but me!" laughs Nolden. "Even other musicians expect us to sound like Nightwish and Evanescence, and we show up and play heavy metal; in your face stuff, and they always go, 'Wow, I didn't know a girl could like you could sound like that!' People are still not used to seeing a female front a metal band."

Nolden is quick to add that no one in Shadowside or otherwise has held her back because of her gender. In fact, she thinks that maybe being a female singer in a male-dominated field has helped her and the rest of the band. Shadowside hope to return to America on tour before the end of 2010.