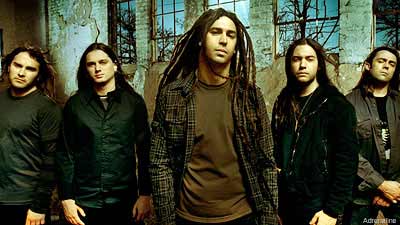 While Shadows Fall have been in existence for 14 years, they'd never made a network television appearance until their recent performance on 'Late Night With Jimmy Fallon.' Playing 'Still I Rise,' the first single from their sixth album, 'Retribution,' the Massachusetts band was the first metal band to appear on the show in its relatively short six-month existence.

"It was pretty surreal," frontman Brian Fair tells Noisecreep. "It was an amazing night. I never expected to be on network television any time, so just to have them open their doors to a metal band and let us sneak in and freak some people out across America was pretty awesome.

"And he was into it, which was really the most surreal part. Jimmy was really psyched we were there, and was into the performance."

While Shadows Fall were the first metal band to appear on 'Late Night,' they'll soon find themselves in good company. Megadeth and Mastodon have been booked to appear on the show in the next two months. Fallon might have found his niche. 'Retribution' will be released on Sept. 15 on their own Everblack Industries label.