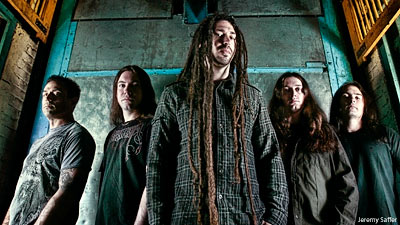 Shadows Fall's 2010 touring schedule will include the Massachusetts metal band's debut on the annual Mayhem Festival, July 10-Aug. 14. The quintet, which is currently on the road for last fall's 'Retribution,' will play the Jägermeister stage in an early evening slot. That's just fine with frontman Brian Fair. He doesn't particularly envy the headlining spots held by Korn and Rob Zombie.

"No one wants to play last anymore. That used to be the goal. Now it's the slot nobody wants," the singer tells Noisecreep. "It's better to go on earlier, because the audience isn't so tired. You can play and then go drink. Or you can meet fans and hang out with the kids," says the Ozzfest veteran, who adds that he won't be too bored during the festival. "Mayhem has lots of great bands on it, so that definitely makes the all-day shows that much easier."

One of the coolest things about the sprawling lineups of the summer festivals, says Fair, is that they not only unite different generations of fans from various metal genres, which he sees essential for a strong supportive metal scene, but they also bring together the different generations of bands. "Doing things like Ozzfest, you really see it all come all together," says Fair. "What inspires me is you see how much metal's grown.

"These all-day festivals are great, but you do have a lot of time on your hands," he continues. "They start so early, and then you're done and it's like, 'What do we do now?' Well, you go to Jägermeister booth and the next thing you know, you've killed a few hours." And in some kind of crazy way that you can't remember, too. "Yeah," Fair agrees. "We call it time traveling, where suddenly it's like midnight and you're back on the bus, and you have no idea how you got from point A to point B."