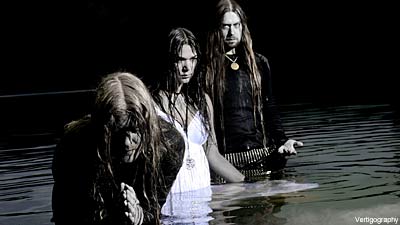 German metal trio Secrets of the Moon are on their first U.S. tour, and they recently discussed American beer and the making of their latest album, 'Privilegivm.' Surprised to find the States very different from their mother country, they're also pleased with the audience response. "After the shows, so many people are showing up wanting to talk to us and take pictures," says Secrets drummer Thrawn. "Even if people had never heard of our band before."

The band is sharing a bus with Moonspell, but they have no complaints. Tourmates Divine Heresy may have a different sound, but Thrawn says he appreciates the variety because it brings in a mix of people. Being German, the man knows and loves his beer, and isn't too impressed with the swill he's gotten so far in the U.S., saying, "Most of the time, we are getting PBR, so this one [points to our Budweisers] is OK. Maybe you should work on that."

Thrawn feels that 'Privilegivm' is as black metal as they can get, despite the surface of it sounding more melodic than previous recordings. "Now we [have] some more doomy parts, we love doom a lot, it was a part of Secrets of the Moon," he admitted. "I think it sounds more raw than the previous album. 100 percent black metal." The band is still touring America until next Friday, when they complete their run in San Antonio.