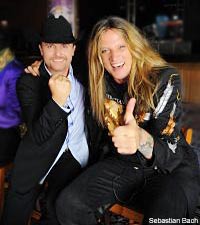 Sebastian Bach is bringing his outlaw attitude to a place where it belongs -- country music. The perennial youth gone wild is feeling more kinship with that genre these days than the reunion acts from back when his metal band, Skid Row, sold millions of albums 20 years ago.

"For some reason, Skid Row fans or my fans are so hung up on these three or four tunes that I did a billion years ago," says Bach, on the phone from the airport, while on his way to a gig tonight (Aug. 25) in front of 20,000 people at Telus Field in Edmonton, Alberta -- where he will join country music duo Big and Rich onstage.

"I don't get it. I completely don't understand it because when I made it in rock, I said, 'This is f---ing great. Now I can make music the rest of my life.' Some people just wanna make the same record over and over again for the rest of their life, and that's just not me. That's totally not me."

Rest assured, Bach is still working on the hard rock follow-up album to his 2007 solo project, 'Angel Down,' collaborating with Hatebreed frontman Jamey Jasta and guitarist John 5 from Rob Zombie's band. But he's working on a country album, too. He has at least 10 songs in the can, although he's in no hurray to release it.

"It takes a long time for me to feel like I can put my name on a record," Bach says. "I hate to use that word 'country' because people have a weird idea. To me, my idea of country is Neil Young 'Old Man,' or Allman Brothers, or Willie Nelson 'Whiskey River' and stuff like that. I like outlaw country. I like the bad ass Waylon Jennings coke country [laughs], Leon Russell with long hair, f---ing partying [laughs]."

The country kick started when Bach -- who sang the lead in 2000's Broadway production of 'Jekyll & Hyde,' and appeared as Jesus of Nazareth in the stage production of 'Jesus Christ Superstar' from 2002 to 2003 -- met another challenge head on, when he was invited last year to live in a house with a motley crew of contestants on the CMT reality show 'Gone Country 2.'

Joining other country music hopefuls such as Jermaine Jackson (his roommate), *NSYNC's Chris Kirkpatrick, actor Lorenzo Lamas and actress Sean Young, Bach was put through 'country lifestyle' challenges, but also had the opportunity to write songs.

"I won, dude," Bach laughs, both proud and amused. "That's the point of the whole thing, I'm saying. I was the winner and I've done a lot of these reality shows, and this was by far my favorite reality show I ever did because the prize that I won. I got a $75,000 video."

Bach penned two songs on the show, 'Jumping Off the Wagon' and 'Battle With the Bottle,' with solo artist Jeffrey Steele (who has written hits for Miley Cyrus and Rascal Flatts) and Vicky McGehee (Toby Keith, Tim McGraw, Faith Hill). "There are couple of other songs, but those are the two good ones," says Bach. "I tried to cover all the bases in country music -- one song's about drinking, one song's about not drinking [laughs]."

For the video, he chose 'Battle With the Bottle' and hired his favorite director, Wayne Isham, who did Skid Row's '18 and Life' and 'Youth Gone Wild.' He's also worked with everyone from Mötley Crüe, Megadeth and Def Leppard to Britney Spears, Avril Lavigne and Kelly Clarkson.

"So that ended up really good," says Bach. "It was a wonderful kind of scam that I played on the whole reality show genre, to come out the other end with a brand new video. I can't think of any other reality show where that happened."

Bach, who dons a cowboy hat in the video, and looks like he hasn't aged a bit, recorded those two songs with John Rich, who's since invited him to jam at five gigs: two in Las Vegas, two in Atlantic City, and one in Jacksonville, Fla. Tonight's show in Edmonton is Bach's first with Big and Rich -- and first to an entire stadium-sized crowd of country fans at a baseball field.

"John Rich asked me to come on a whole Canadian tour in January, tentatively," says Bach. "If it goes well in Edmonton, he said, 'Dude, let's take this thing across Canada -- 20 gigs, Big and Rich. You're on the bill every night, every city.' I'm like, 'You tell me when. Give me the plane ticket, and I'm there!' because I just love playing. I love playing music.

"It's just something that I never saw coming, but the one thing about country fans is they buy CDS and they go to concerts -- and that works out for me as a musician," he says with understated humor. "I enjoy that feature about country."