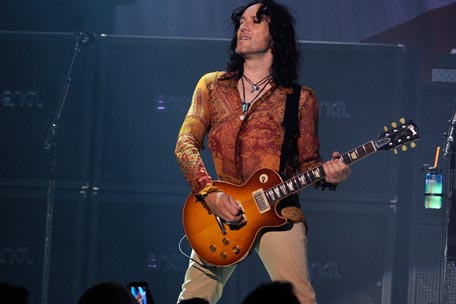 Def Leppard guitarist Vivian Campbell recently revealed that he is battling Hodgkin's Lymphoma and he has spoken out about the diagnosis to 'Friday Night Rocks' radio host Eddie Trunk. Campbell says was blown away by the outpouring of support he received from fans in the wake of the reveal. In some ways, the love that the fans have shown him helps provide him with strength to clear this hurdle.

"I've been very, very touched by all the love and support I've had via my Facebook page and via the Def Leppard Facebook page and the Last in Line page. So it's good to know you're not alone," Campbell said (quotes excerpted by Blabbermouth).

He revealed that he did not want to share the news with the public at first, but he changed his mind and does not regret that choice. "For me, I did kind of want to not go public with it at first, because it is a weird kind of thing," the guitarist, who is in chemotherapy to treat the disease, said. "You've got to kind of learn to deal with it on your own terms before you can address the rest of the world about it. So, you know, I feel very comfortable going public about it."

The public and fans weren't the only ones he wanted to conceal his condition from. He said, "For the first couple months, I even tried to keep it from my children, because they were still in school and doing exams and stuff and I didn't want to add to their concerns. But after a while, it's inevitable that you, you know, something's going on and you have to kind of come out with it and kind of explain what the situation is. But I'm very comfortable with it."

Campbell is also okay with the treatments. While chemo can wreak all sorts of havoc on the body as it does its job to eradicate the cancer cells, Campbell is dealing with it with a positive attitude. He even joked that his hair has taken a beating due to the course of action, likening himself to guitar great Joe Satriani.

Campbell's perspective is certainly another thing that can help him get through this rough period. Noisecreep sends our best to to the guitarist.