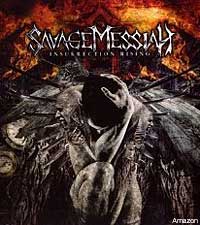 Carrying to the tradition of classic heavy metal in the U.K., the London-based band Savage Messiah make their way stateside with their debut release on Candlelight Records this week. Resonant with classic thrash sounds and precision in their technical musicianship, this is a band to keep on the radar in the coming months.

With their album produced by Chris Tsangrides -- notable for his involvement with Anvil, Judas Priest and Yngwie Malmsteen, just to name a few -- Savage Messiah are both a strong and positive representation to both the United Kingdom and its metal scene.

To date, the band has some shows coming up in November and December to end the year, but there has been no word as to whether the band will be making their way to the U.S. in support of the release just yet. As always though, stay tuned to Noisecreep for continuing updates on the band and further news on 'Insurrection Rising'.