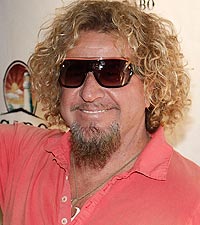 IOWA CITY, Iowa (AP) - A defamation lawsuit against Sammy Hagar filed by a former Playboy bunny who claims he fathered her child has been dismissed, and the former Van Halen frontman is pleased with the result, his attorney said Monday.

U.S. District Judge Linda Reade ruled April 30 that Hagar did not defame the woman - identified as Jane Doe in court documents - when he accused her in his 2011 memoir of falsely naming him as the baby's father in order to extort money.

"We're certainly gratified by the result and we hope this means that it's all over," said Hagar's attorney, Wesley Kinnear of San Francisco. "It's difficult to be involved in litigation like this. It was a surprise to him. And he's very pleased that the judge ruled the way that she did."

The woman, of Waterloo, Iowa, claims she and Hagar had an affair in the 1980s, when she was a Playboy bunny and that she became pregnant with his child after a concert in 1988.

At the time, the two reached a legal settlement in which Hagar agreed to pay her during the pregnancy as long as she kept quiet about her belief that he was the father. The child died shortly after birth in 1989 and no paternity tests were conducted. In all, Hagar paid the woman $7,000.

In his 2011 memoir, "Red: My Uncensored Life in Rock," Hagar denied fathering the child and accused the woman of extorting him. He wrote that the woman, who then lived in Lansing, Mich., seduced him after a concert in Detroit, and then soon thereafter claimed she was pregnant. "I smelled a setup," he wrote.

Hagar said he agreed to pay the woman during her pregnancy because his manager convinced him it was "the smart thing to do" and then to reassess the matter after the birth. Hagar said that when he learned of her claim of the baby's death, "I don't believe that she ever had a baby. She may have had an abortion early on."

"I never heard from her again. Obviously, it wasn't my baby, and they knew it," he wrote. "They just extorted me as long as they could. No one ever saw her again."

The woman filed a lawsuit against Hagar in 2011 claiming he defamed her, violated her privacy, intentionally inflicted emotional damage and breached their 1989 confidentiality agreement.

But Reade ruled that Hagar did not defame the woman because he did not refer to her by name in the book - identifying her erroneously as a "Playboy bunny from California" - and the woman did not prove she suffered any financial, reputational or emotional injuries from his statements. Only individuals who already knew about their relationship, not the general public, would have understood Hagar was referring to her in the book, she added.

"Although Hagar's statements in 'Red' brought back painful memories for Doe, the evidence does not support a finding that Hagar's conduct was extreme enough to permit the court to find outrageous conduct sufficient to support Doe's intentional infliction of emotional distress claim," Reade wrote.

Hagar did not breach their confidentiality agreement because he did not disclose the terms of the deal, she added.

An attorney for Doe didn't immediately return a message. She still has time to file notice of appeal.