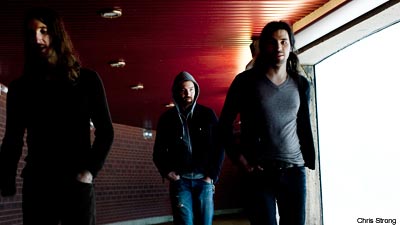 Many are going to call 'Geneva,' Russian Circles' third album, a return to a heavy frame of mind that wasn't displayed on the band's last effort, 2008's 'Station.' But for guitarist Mike Sullivan, 'Geneva' is much more than a loud record. "There are a lot of unsaid emotions," he told Noisecreep, while discussing what lies behind the record for himself. For Sullivan, the tucked emotions come from his battle with two major health issues over the past year, with one making him question whether he would be able to play guitar again -- and the other if he was going to live or die.

"For a while, we didn't know if it was cancer." Sullivan revealed about the health issue that began his time of struggle. "Oddly enough, it's a gluten insensitivity, and it was kind of acting like autoimmune disease because my body was kind of attacking itself in many ways -- like the whole nervous system, that caused a whole onset of different seizures and this other crap."

Needless to say, coming up with a diagnosis was a harrowing ordeal. "After twice-a-week, non-stop doctor's visits with zero answers and canceling tours here and there, things are starting to shape up," Sullivan says, but there was actually another attack on his health that happened during this time as well. "In the middle of all that, I got a repetitive strain injury in my arm, and I couldn't play guitar for a month or so; and this is a month and a half before recording."

The repetitive strain injury put Sullivan's arm in a sling, and the entire record in question. "It was scary for a while. We already had the release date set and the recording time booked and tours lined up," he recalled. "Thankfully I feel very fortunate that everything worked out and all the work paid off with the therapy and acupuncture; which I always thought was bulls--- before," laughed Sullivan. "But now I'm a walking billboard for it."

And, of course, it was his time playing music that contributed to the problem in the first place. "I had a lot of built up tension from playing guitar for all those years, and when you release the tension it releases energy that has been built up for years that really can't do with any other method," Sullivan thankfully says of acupuncture. "It's a good way to let things restore back to the natural state of the muscle."

Even with the health issues that put the band in question, it feels like 'Geneva' was recorded much quicker than last year's 'Station,' which seemed like a record the band worked and toiled for some time to put out. But Sullivan says it's the exact opposite. "'We didn't want things to sit there; we didn't have a bassist and we just wanted to record a record out of a therapeutic experience to prove to ourselves that we we're good to go," Sullivan says of 'Station. "That was all written in a two month period and this time we had way more time to demo, more time to work on songs, change things around, decide when some things aren't working, or working; so ironically we had way more time this time around. And we had Brian fully on board so we hard more time with him to work around the songs and incorporate him more; where as last time he was just he was just part of the demos and played here and there."

'Geneva' is the first recording that bassist Brian Cook of These Arms Are Snakes -- and Botch alumni -- played on as a member of the band. Previously Brian had only contributed on demos and played shows here and there. Sullivan says the band had "way more preparation" this time around, through trading demos and flying Brian out from Seattle to Chicago a week before tours to write and work on songs. Some days the band even recorded up to five demos a day.

"We went out of our way to make it sound nasty, not low-fi," Sullivan said. "But rough around the edges, so it sounds more like a live record."